Election law being amended for timely publication of election results; Lowenfield, Myers should be “fired”-Jagdeo 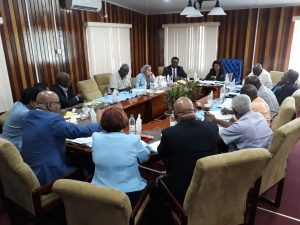 Mr. Bharrat Jagdeo led a delegation into a meeting with the Guyana Elections Commission on Tuesday, September 10, 2019. (file photo)

Vice President Bharrat Jagdeo on Tuesday announced that the Representation of People Act would be amended to ensure votes are counted transparently, even as he called on the Guyana Elections Commission (GECOM) takes steps to remove the Chief Election Officer Keith Lowenfield and Deputy Chief Election Officer Roxanne Myers.

“We will be drafting shortly amendments to the Act that will ensure transparency in the count and a clear methodology as to how the count must proceed, leaving no ambiguity,” he said. Further, he said the law would provide for the Statements of Poll (SOPs) to be published in the newspapers, Official Gazette and Online before the count begins.

“Even before the count starts, the industrious Guyanese can then go, see the SOPs and they can calculate who won the elections. People can know that because they (GECOM) will have to post the original SOPs say in the first day after the elections,” he said.

Noting that recount is already provided for in the Representation of the People Act, he said the pro-opposition commissioners did not want to use the process outlined and so the law would be refined to stipulate how recounts must be done.

He issued the call for Mr. Lowenfield and Ms. Myers to be be fired because of their alleged involvement in attempting to rig the elections to keep A Partnership for National Unity+Alliance For Change (APNU+AFC). The Vice President cast heavy doubt on the holding of Local Government Elections with the duo at the helm of GECOM’s administration of polls. “We have made it clear that, apart from those changes, that with Lowenfield and Roxanne Myers there, you cannot have free and fair elections. This is a red line for us,” he added. The Chief Elections Officer, Deputy Chief Elections Officer, Region Four Returning Officer Clairmont Mingo, Information Technology Officer Enrique Livan and Registration Officer Sheffern February have been all been charged with offences related to the March 2, 2020 general and regional elections.

None of them has been convicted.

Against the backdrop of a national vote recount and a slew of court cases that handed Jagdeo’s People’s Progressive Party Civic (PPPC) a win in the March 2, 2020 general and regional elections, he said the seven-member Elections Commission (GECOM) should ask to the see the Statements Of Poll (SOPs) and use the finding as the basis to fire Mr. Lowenfield and Ms. Myers. “It’s unacceptable that GECOM itself, the Commission to see all that happened. They should just ask for the SOPs (Statements of Poll) that were submitted to thee Chief Justice and if those SOPs showed, that were in Mr. Lowenfield’s possession, that the recount numbers matched the SOP numbers, then they should just fire him immediately because that meant that he was prepared to accept what Mingo told him outside of the Statements of Poll that he had in his possession and then if there are fraudulent ones, that is even worse for him,” he said.

Mr. Mingo had issued two declaration of results for Region Four and the Chief Elections Officer had gone on to remove more than 100, 000 votes, saying that thousands of votes had been tainted by massive voter impersonation of dead people and migrants as well as irreconcilable votes with records. The High Court has since thrown out an application for an election petition into those alleged irregularities because of flaws by APNU+AFC Representative of the List, David Granger.

The law states that the Chief Election Officer should only reveal his records to a court of law. With a pending APNU+AFC election petition, the Statements of Poll and the Statements of Recount have been lodged with the Registrar for safekeeping based on an order by Chief Justice Roxane George-Wiltshire.

Questioning whether the Commission was interested in a credible and fair elections machinery in which Guyanese would have confidence, the Vice President said the “entire commission” was worried about what APNU+AFC would say.