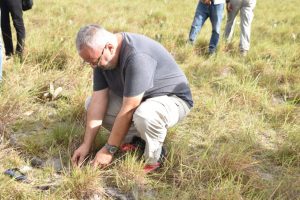 Geologists said there was no need for South Rupununi residents to move out of their villages as a result of a 5.7 magnitude earthquake there earlier this month, and they explained that the rumblings would continue for a few weeks more before everything returns to normal.

Government’s Department of Public Information (DPI) said geologists Robeson Benn and Leandro Pires at the weekend visited Katoonarib in deep south Rupununi where they met residents and inspected the impact of the January 31 quake that rattled the Rupununi and northern Brazil. The quake was also felt in other areas of Guyana.

During a community meeting in Katoonarib on Saturday, Minister Benn noted that earthquakes in that area were rare and persons should not migrate.

“This is not necessary, and it will only cause enormous distress, dislocation and unnecessary expenditure of money. There is no need to leave your homesteads to go to any other place,” said Mr. Benn who is also Guyana’s Home Affairs Minister.

“That is completely impossible. If that were the case, we would have lost the seawalls, the city of Georgetown and everything would have been in the ocean already. Not to happen all the way out here, some 700 miles in the Rupununi. It is totally unrelated, and I want to dispel those suggestions that it is related to oil extraction out on the coast or in the ocean,” said Benn, a former Commissioner of the Guyana Geology and Mines Commission (GGMC). 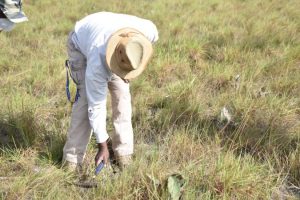 “We have taken out much more volumes of pure water for drinking than we have for oil for those sediments going out there. So, those things are totally untenable in relation to these events,” he added.

Mr. Pires noted that the rumbling sounds are normal following an earthquake and should not be a cause of concern. He added that a release of energy causes the noise through the cracks in the earth.

“It supposed to happen for another couple of weeks, and then after that, it should finish. It is a very rare event for an earthquake to happen inside a stable plate like where the whole of South America is located, except for the Andes Mountains,” Mr. Pires said.

Minister Benn assured the residents that there would be seismic and audio monitoring and gravity and monoatomic assessments of the area.

The team, which also included the Director-General of the Civil Defence Commission, Lieutenant Colonel Kester Craig,  also visited  Sawariwau, also in Deep South Rupununi, where there were structural damage and cracks in the earth’s surface.

The technical team conducted inspections to gather information to prepare for any recurrence.

Mr. Benn also dismissed reports that there are volcanic events in and around Guyana. He described Guyana’s land area as a “stable continental craton.”  He noted that a geological technical report on the earthquake’s effects would be completed and shared with the Government and the affected communities.

Meanwhile, Head Teacher of Sawariwau Primary, Lennox Henry complained that vibrations and loud rumblings were being felt and heard continuously. He added that they felt movement of the earth as recent as Sunday morning. 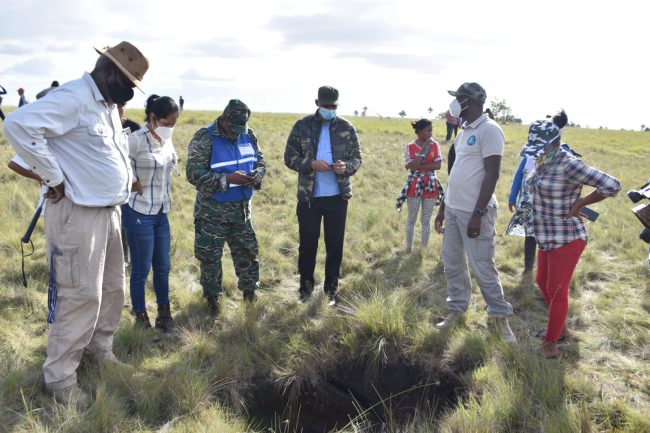 Assessment team observes a hole created by the earthquake

Meanwhile, CDC head Lt. Col. Craig reported that there was minor damage as a result of the quake. Two houses in Katoonarib suffered some damage, while there were several cracks in houses and Government facilities in Sawariwau.

Of concern to the CDC is the types of materials used to construct buildings in the Rupununi. The buildings mainly have thatched roofs made from eta palm and walls made from adobe bricks, which cannot withstand an earthquake’s shocks.

“They are good under normal circumstances but thinking about seismic actions like what has occurred, some emphasis may have to be looked at how can we improve the construction and the building codes for these areas. So, we are going to have some discussions with Public Infrastructure to come and do some structural assessments to come up with recommendations of improvements in terms of construction,” Lt. Col. Craig said.

One resident of Katoonarib whose wall collapsed, Grace Cyril, relayed that the incident occurred while she was out of the area. She expressed appreciation for the assistance provided by the Regional Democratic Council to repair her home.

“I have already received 16 zinc sheets, 10 sacks of cement and wooden materials.”

During an inspection in Katoonarib, the team observed visible cracks in the earth and three areas of sizable depressions.

Over the next three days, a small team from the CDC will conduct continuous assessments in the affected communities.

Meanwhile, Deputy Toshao of Katoonarib, Florie Singh, is satisfied with the Government and the CDC’s intervention.

“We, the people of Katoonarib, we are very happy to have you guys here and to get the direct information from you the people that are trying to help us, and I must say that I am relieved from the assessment that has been done. I am a bit relieved from all the terrifying things that I was going through and not just me, also all my villagers that have experienced this very terrifying earthquake that has happened recently here. And I must say thank you to the minister.”

The shift of the earth’s plate occurred about 10km below the surface.