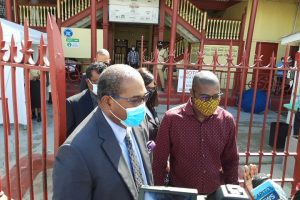 Mr. Patterson was represented by Attorneys-at-Law Nigel Hughes, Ronald Burch-Smith and Khemraj Ramjattan.  Mr. Adams and his lawyer  Attorney-at-Law, Glen Hanoman left the courthouse and did not speak with the media. 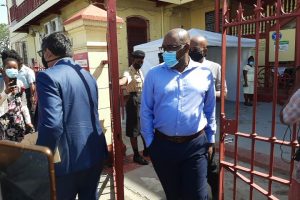 The particulars of the charge are between November 18, 2016, and February 1, 2018, at Georgetown, they conspired together with each other and with other persons unknown to defraud the Demerara Harbour Bridge Corporation of GYD$162,635,015 funds of the Demerara Harbour Bridge Corporation Asphalt Plant Account for a project about a feasibility study and design for a new bridge which was not a function of that Corporation and so monies from the Asphalt Plant account could not be used.

Outside the courthouse, Mr. Hughes explained that Mr. Patterson and Mr. Adams were charged indictably with conspiracy to defraud. In explaining the background, Mr. Hughes called the allegation “malicious”. He said a foreign government had approached the Guyana government expressing an interest in providing services to determine the feasibility of the new Demerara Harbour Bridge. “This was not an act or action initiated by Mr. Patterson and, therefore, in the circumstances I believe that this charge is not only unfounded but is malevolent,” he said. 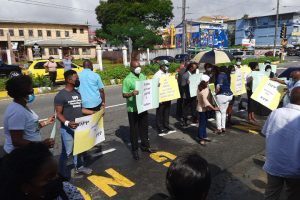 Mr. Hughes noted that parts of the feasibility study are being used by the People’s Progressive Party Civic (PPPC) administration. “These charges seem clearly to be in the political realm rather than the legal,” he said.

The feasibility study had been conducted by the Dutch company, Lievense CSO Engineering Contracting BV.

The PPP , while in opposition, had filed a complaint to the Guyana Police Force’s Special Organised Crime Unit (SOCU). But the force had in June 2019 stated that it had received legal advice clearing Mr. Patterson. That advice had stated that  there was no misuse of funds, no evidence that a criminal offence was committed and no evidence of any collusion between Arie Mol/Lievense CSO and staff of the Ministry of Public Infrastructure.

While the Mr. Patterson and Ms. Adams were being arraigned, about 20 persons, including several opposition parliamentarians led by Opposition Leader Joseph Harmon, picketed and chanted outside the Georgetown Magistrates’ Court in support of Mr. Patterson. “Patto deliver, Edghill is a failure,” “Bridges, Patto,” “Roundabout, Patto”. “Enough is enough,” and “PPP stop thiefing taxpayers money through COVID relief.”

All opposition members of the House bipartisan Public Accounts Committee were among those on the picket line.