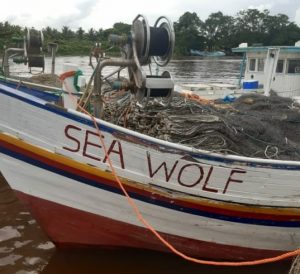 The owners of the two Guyanese fishing vessels that up to Sunday afternoon continued to be detained  by the Venezuelan Navy have accused the Guyana Defence Force (GDF) Coast Guard of doing little to stop Venezuelans from fishing illegally in Guyanese waters.

“They are not doing anything. All they do is sleep whole day,” said Kumar Lallbachan, the owner of fishing vessel Lady Nayera that was intercepted by the Venezuelan Navy in Guyana’s waters off the Waini coast last week Thursday. Asked to confirm whether he said the Venezuelans were fishing illegally, he said “yes, illegally.”

Repeated efforts to contact an army spokeswoman by phone, WhatsApp and e-mail for a reaction were unsuccessful.

They also complained bitterly that they are often at the mercy of Venezuelan fishers and other mariners from that Spanish-speaking nation who openly threaten them with guns during disagreements. “The problem is that these Venezuelan boats come and fish in here. When they are fishing and anybody try to tell them anything, they want to pull gun on them,” Mr. Lallbachan said.

The owner of  Sea Wolf, Kenneth “Scar Face” Garraway also expressed frustration with the service being provided by the GDF Coast Guard. “Our Coast Guard is not doing anything to help us. All the Coast Guard doing is looking for money,” he said. Mr. Garraway insisted that the GDF Coast Guard knows that Venezuelan vessels are fishing in Guyana’s waters illegally.

He related that on Saturday he sent out a boat to sea but forgot that “the boat paper” expired and the Coast Guard turned back the boat unless they were paid GYD$30,000 but he denied. “When my boys (crew) called and told me, I told them to bring back the boat. Those things are not right. Why Guyana Coast Guard is doing those kinds of things,” Mr. Garraway said.

The Guyanese fishermen are considering organising a protest outside the Venezuelan embassy later this week to vent their frustration against the interception of the boats and taking them to Guiria.

The GDF Chief-of-Staff, Brigadier Gary Bess is already on record as saying that most of the illegal fishing boats are from neighbouring Venezuela and Suriname. He has said that “persons are being prosecuted and actions are being taken.”

Mr. Bes said the last time a fishing boat had been intercepted by the GDF Coast Guard was mid-2020.