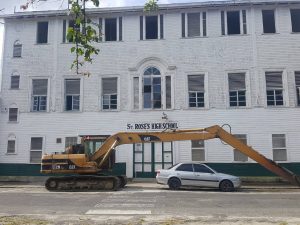 Courtney Benn Construction Company has been sued for more than GYD$347 million for failing to rebuild the St. Rose’s High School in keeping with a contract.

The Attorney General says Ministry of Education Project Manager, Civil Engineer Ron Eastman during an inspection in August last year found that only piles had been driven.

The contract was terminated by government on November 2, 2020, citing fundamental breaches of the contract.

Through the Attorney General, government moved to the court, saying that the actions of the Defendant have impacted the interest of the public in the non-completion of the St. Roses Secondary School. Further, government says the exigencies of the common good should prevent the First and Second  Named Defendants from being unjustly enriched based on the advances received under the Contract Agreement.

Government wants the High Court to order Courtney Benn Construction to pay more than GYD$100 million for breach of the original contract that was signed on August 18, 2018 and an addendum on December 23, 2019 for the reconstruction of the St. Rose’s High School.

Government wants the company to pay more than GYD$41.2 million as liquidated damages calculated at 10 percent in keeping with the contract.

The State is also asking the High Court to order the construction company to repay GYD$67.3 million which was an advance payment because no works were done.

Back in August 2018, Courtney Benn Construction Company had agreed to rebuild St. Rose’s High School at a cost of GYD$352.7 million.

In December 2019, an addition was made to the contract to increase the cost by GYD$59.5 million for the construction of the , bringing the total to GYD$412.3 million. The Attorney General says the additional money was for Deep Foundation works which included the driving of 224  timber piles and preparation of the reconstruction site.

The Court papers say the addition to the contract allowed for a 20 percent mobilisation advance amounting to GYD$29.5 million.