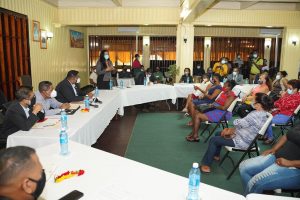 President Irfaan Ali and other ministers speaking with residents in Linden on Thursday, January 14, 2021

President Irfaan Ali on Thursday promised that his administration would build 1,000 houses in Region 10, 50 of which will be for young professionals by this October, and already A Partnership for National Unity+Alliance For Change (APNU+AFC) has said the announcement was in response it its call and that it would ensure government keeps its promise this time,

The plans, he said, include training youths and women to construct the houses, and sourcing the construction materials from the region also known as Upper Demerara-Upper Berbice.

“We need the materials for the construction of these houses to come from this region. The lumber, the sawmill, block makers and carpenters will all be engaged, if you don’t have the skills, we will bring in people to train you so that employment is created for the residents here,” the President was quoted as saying in a release about his visit to the region.

Referring specifically to the 50 houses for young professionals, he said those would be built at Amelia’s Ward, Linden. He said those would be for doctors who are working in the region. President Ali told the doctors that officials from the Central Housing and Planning Authority (CH&PA) would return to the region on Monday with representatives from the banking institutions to  fast-track the prequalification process.

“Here is what we are going to do, we are going to bring the bank in… and we’re going to develop 50 Young Professional homes. We have the designs just like we did for Eccles. So you’ll be living in an environment that you’d be proud of. So we will set aside 50 house lots. We will build the homes,” he was quoted as saying. 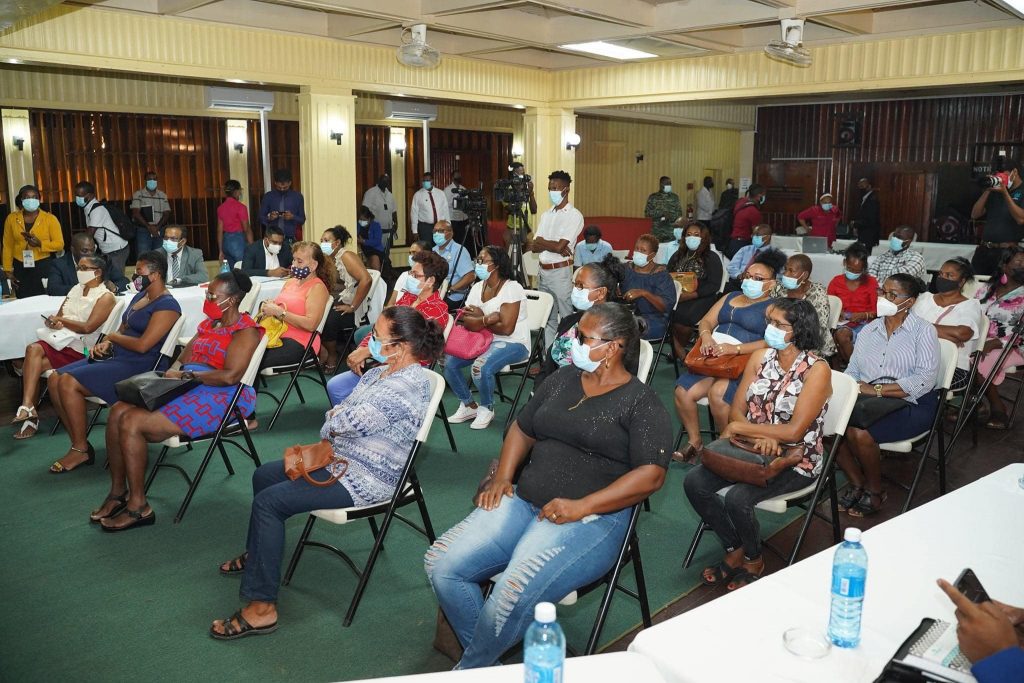 Attendees at the meeting with President Irfaan Ali and his delegation in Linden on Thursday, January 14, 2021

The President encouraged the health workers to ensure that they work collectively in delivering optimal healthcare services to the residents of the region. Immediately following the announcement, one of the beneficiaries, Dr Aliana Anderson, used the opportunity to express gratitude to President Ali for his swift intervention. “I feel very pleased because we go there and say that we are young professionals and right away he knew exactly what could have been our issue. I was just thinking about a whole long speech I had to say and he just went right to it. I feel very happy and I feel like he is the person for young people, like he wants to see us develop and be better. I am really happy.”

The Region 10 administration, which is controlled by APNU+AFC, shortly after sought to take credit for President Ali’s announcement that 1,000 houses would be built there.  The administration said it was only after Regional Chairman Deron Adams appealed for help to ease the backlog of applications in the Region that Dr. Ali made the announcement.

“In response to Regional Chairman Deron Adam’s petitioning the government for action to address the thousands of applications for housing currently in the system from residents of Region 10, His Excellency President Irfaan Ali has announced that 1,000 houses will soon be constructed in Linden.

Regional Chairman Deron Adam’s has since indicated his gratitude for the swift policy response to his request on behalf of the people of Region 10, and pledged that his Council will monitor the implementation of this project when it materialises to ensure that these commitments are kept,” the Region 10 Administration’s Facebook stated.
At APNU+AFC headquarters in Georgetown, the opposition coalition seemed more strident in its criticism of the President’s announcement, saying that even as Housing Minister he had broken promises to Linden to provide 20,000 house lots. “We note the de facto President Mr Ali pronouncement that 1000 house lots will be allocated to the people of the Region. Unfortunately, there were no details. No one knows where are the lands situated. No one knows who will benefit and what criteria will be used to allocate the lands. It is the usual political announcement with no intention to deliver,” the coalition said.

The APNU +AFC  demanded that the People’s Progressive Party Civic-led administration provide details of  the housing plans announced today or it would be labelled “political posturing for media headlines.” “The APNU+AFC Regional Administration will hold the regime feet to the fire to ensure that this promise is realised.  The PPP has historically made big pronouncements for Region 10 but always failed to deliver,” the coalition added.