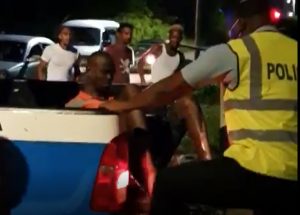 The suspect, whose feet were burnt, being taken away from the fire scene by police.

A Bartica man, who allegedly killed his wife and children, was today remanded to prison  after he was arraigned on three counts of murder.

Kenford Downer  appeared at the Bartica Magistrate Court on Wednesday charged with the murder of his wife and two daughters.

He was not required to plead and was remanded to prison by Magistrate Crystal Lambert.

Investigators were told that Mr. Downer and his wife had an argument over infidelity on on the night of December 12, 2020.

After his wife Carolina Kennedy and her two children retired to bed Mr. Downer allegedly lit the house, killing his wife and two children. They were 5-year-old Mariana Downer and 3-year-old Gabriella Kennedy.

He will return to court January 27.