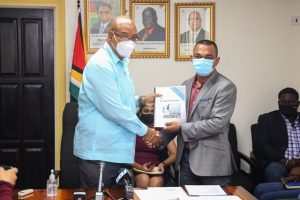 The Guyana Agricultural and General Workers Union (GAWU) has expressed concern about the likelihood of several workers of government’s asphalt plant being retrenched with the acquisition of a new facility.

“This is the first time the Union and the workers have heard of such intentions and we have since written to the DHBC on the matter. We have reminded the Corporation there are certain obligations it has in this regard and have sought an engagement to get greater clarity,” the union said in a statement shortly after the Ministry of Public Works released a copy of an investigation report into the operations of the DHBC and asphalt plant.

GAWU specifically highlighted that the management indicated at page twenty-five (25) of the report that it intends to make some workers redundant arising from the commissioning of the new asphalt plant.

The investigators into the operations of the asphalt noted that the management’s response was that “with the operation of the new Asphalt Plant, there will be a review of the existing employment requirement whereby staff will become redundant.”

In dealing with overtime that has accounted for 19 percent of employment cost, the investigators recommended that management ensures that that employment cost is kept at its lowest  by considering a shift system or additional employees.

The investigation was commissioned by the Minister of Public Works in the wake of alleged misappropriation and the alleged selling of government’s asphalt. The high-level investigation team was led by Chartered Accountant Chateram Ramdihal, and the other team members were Civil  Engineer Heidi Gillette, Civil Engineer Brion Singh, and Accountant Dexter Smith.