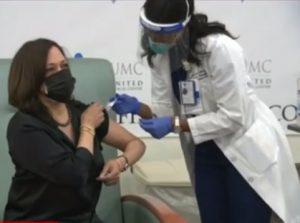 A nurse of Guyanese parentage on Tuesday administered a COVID-19 vaccine to United States (US) Vice President-elect Kamala Harris.

Multiple US news media identifies her as Patricia Cummings whose parents are Guyanese immigrants.  Nurse Cummings administered the vaccine to Ms. Harris at the United Medical Center in southeast Washington, D.C.

Ms. Harris’ parents were also born overseas; her father from Jamaica and her mother from India.

“That was easy! I barely felt it,” Harris exclaimed after being injected. The vice president-elect thanked the staff of United Medical Center for serving “a community that is often overlooked.” Harris later said she chose to be vaccinated in Southeast D.C., a majority-Black area of the city, to encourage “trust in the vaccine, in the people who work in your community every day,” USA Today quoted her as saying.

“I want to encourage everyone to get the vaccine,” Harris said. “It is relatively painless and effective.”

Harris received the vaccine as the Trump administration’s rollout of vaccines across the country has lagged projection. Biden has pledged to make 100 million vaccines available in his first 100 days in office.

The incoming executives also received the vaccine amid a debate over whether public officials who were vaccinated were modeling good behavior or “cutting the line” ahead of groups who more needed the vaccine. Dr. Anthony Fauci had urged Biden and Harris to receive the vaccine for “security reasons.”