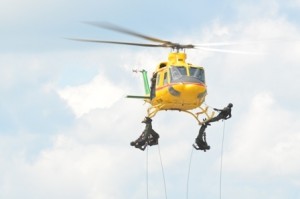 The now unserviceable Bell 412 helicopter in use several years ago.

The Guyana government has already purchased a heavy-lift Bell 412-EPi helicopter for which monies were Monday approved and the aircraft is due to arrive here the latest by next year February, well-placed sources confirmed.

A Guyana Defence Force (GDF) spokeswoman on Monday said the army could not provide details  at this time. “The GDF will release the proper information at the appropriate time regarding the purchase,” the spokeswoman said.

Sources said the aircraft costs US$13.5 million but Guyana got a deal that includes pilot training, engineer training, product support and three-year warranty for US$9.5 million. “This aircraft is going to be a major part of our emergency assistance and security environment,” the source said.

The helicopter is said to have the capacity to carry 15 heavily armed troops or provide VIP airlift. The sources said that the chopper could “fly easily” on one engine if one fails.

Several  members of the National Air Transport Association (NATA) including Captain Gerry Gouveia and Annette Arjoon, have in the past been very vocal about the lack of a proper helicopter to provide search and rescue support in times of aircraft crashes over Guyana’s thickly forested and rugged interior.

The United States Department of Defence (DoD) in October announced that it had approved Bell’s sale of up to four helicopters to Guyana.

Bell 412EPi is latest variant of the Bell 412 helicopter and an upgrade of the 412EP (Enhanced Performance). The helicopter is equipped with an electronic (Digital) engine control for a PT6T-9 engine upgrade and a glass cockpit display system similar to the Bell 429.

The GDF’s existing two helicopters are said to be too light to hover over rugged terrain to rapel troops to emergency sites because they are too light and not powerful.