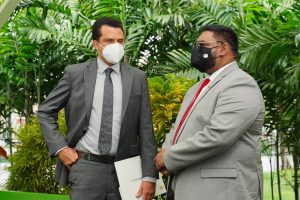 Newly-minted Senior Counsel, Timothy Jonas is recommending a broad-based committee of legal experts be established to recommend to the President who should be conferred with Silk, following a High Court ruling that cited the need for a transparent process.

Attorney General Anil Nandlall, during the case about the role of the Executive in the process, also promised that efforts would be made to ensure there is a more acceptable system in place. However, shortly after the conferral of Silk to himself, Mr. Jonas and Ms. Jamela Ali, he did not have any immediate suggestions.

Mr. Jonas, for his part, recommended a committee made up of the the Chancellor of the Judiciary, Chief Justice, one Judge, three Senior Counsel and the Attorney General decide who should be appointed Senior Counsel. “Let them agree who to invite to apply and then, by majority, in a secret meeting let them decide and let them  make that proposal to the President,” he said.

The Attorney-at-Law continued to complain that the judges were previously invited to submit names to the President but they were ultimately turned down. In his case, Mr. Jonas recalled telling President Ali that he would not have accepted the appointment unless the judges had agreed, a position  he said the Guyanese leader accepted and implemented. “You are judged by a jury of your peers by people who you know what you know and are a competent to assess you and I hope we have that going forward,” he said.  For instance, Mr. Jonas remarked that Attorney-at-Law Nigel Hughes should be appointed Senior Counsel.

Justice Naresh Harnanan, in delivering his judgement, said there was nothing unsavoury about the President appointing Senior Counsel but he cited the need for a transparent process. “The manner of appointing is somewhat opaque. This may lend itself to the perception that persons, who are undeserving of this esteemed honour, may benefit because of some patronage or another,” he said. In that regard, the High Court suggested that the process for the appointment of Senior Counsel be reformed. “There is a need for increased transparency of  the requirement criteria and the nomination and selection process of deserving Counsel to be bestowed with the honour of taking Silk,” the judge added.

Senior Counsel Robin Stoby also reportedly suggested a process in his arguments that were submitted during the case.

Leader of the Alliance For Change (AFC), Khemraj Ramjattan, himself an experienced and long-serving lawyer, said already the Chancellor, Chief Justice and senior members of the judiciary recommend who should be conferred with silk. Mr. Ramjattan acknowledged that the system is not perfect because the President ultimately could turn down the recommendations but he did not believe that the system should be changed. “To go do another tier as to who and who should bring would only mess it up, in my opinion, and we have to kind of live with this existing system because you can have a President who don’t want to give a certain person,” said Mr. Ramjattan.

He did not believe that another group of persons being involved in the process would prevent the President from exercising his own prerogative.