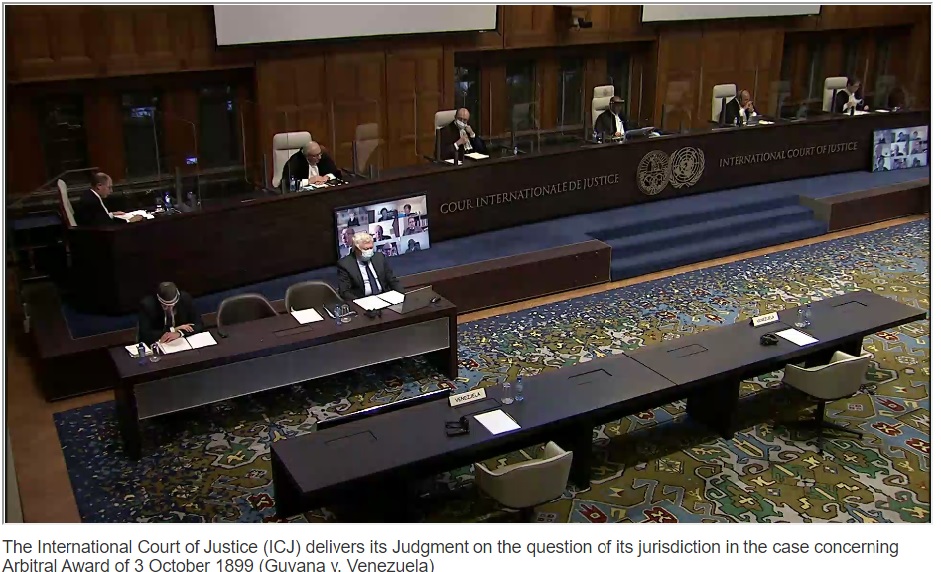 The International Court of Justice (ICJ) on Friday ruled that it could hear Guyana’s case on the validity of the 1899 Arbitral Tribunal Award that settled the land dispute with Venezuela, even as that Spanish-speaking country was criticised for not participating in the hearing on the jurisdiction of the World Court.

The Court said the judgement on jurisdiction is “final and binding on the parties.”

The President of the World Court, Abdulqawi Yusuf says the validity of the 1899 Award has to be first settled before resolving the boundary dispute. “It would not be possible to resolve definitively the boundary dispute between the parties without first deciding on the validity of the 1899 Award about the frontier that will bridge Guyana and Venezuela.

The Court, therefore, concludes that Guyana’s claims concerning the validity of the 1899 Award about the frontier between British Guiana and Venezuela and the related question of the definitive settlement of the land boundary dispute between Guyana and Venezuela fall within the subject matter of the controversy that the parties agreed to settle through the mechanism set out in Articles 1 to 4 of the Geneva Agreement,” he said.

The World Court, which is the highest juridical body of the United Nations (UN), unanimously finds that it does not have jurisdiction to entertain Guyana’s claims arising from events that occurred after the signature of the 1966 Geneva Agreement.  Venezuela claims the Essequibo Region on the grounds that the 1899 Award was null and void. For several decades now, there have been a number of incursions and tactics to scare off investors in Guyana’s gold, timber and oil industries in that region.

The World Court criticised Venezuela for not participating in the hearing on the question of its jurisdiction. “The Court wishes, first of all, to express its regret  at the decision taken by Venezuela not to participate in the proceedings of the court. The non-appearance of a party obviously has a negative impact on the sound administration of justice,” the President of the Court said. While Venezuela has forfeited the opportunity to present evidence and arguments in support of its case and counter the allegations of its opponent, but that would not affect the outcome. “The Court emphasises that the non-participation of a party in the proceedings at any stage of the case cannot in any circumstances affect the validity of its judgement,” he said.

The Court said it would take into consideration Venezuela’s memorandum “to the extent that it finds it appropriate” and that Venezuela was free to join the case at any time.