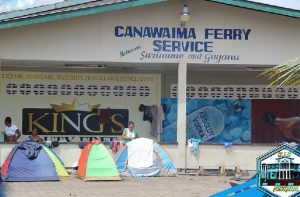 The Cubans at South Drain had been repeatedly urged to evacuate the site. (Starnieuws picture)

Surinamese police have removed the remaining  number of Cubans at the South Drain, Nickerie Canawaima ferry port where they had been camping out for several weeks in the hope of crossing the Corentyne River to Guyana.

They had ostensibly planned to seek asylum through the American embassy in Georgetown, but Guyanese authorities had said the Cubans’ real intention was to continue travelling to neighbouring Brazil. Guyana has since aborted plans to resume the ferry service on December 12.

Starnieuws reported on Thursday that heavily armed police took away the remaining Cubans who had camped out at South Drain for two weeks.

The number of Cubans had reduced considerably from about 400 during the past seven days, after most of them had indicated they wanted to return to Havana and headed back  by road to Paramaribo, the Surinamese capital.  Starnieuws said police have since deported 16 Cubans including leaders of the groups.

Surinamese police moved in and removed the remaining Cubans Wednesday night after they began protesting by hitting pots and pans because authorities refused to change their status from  asylum seekers to tourists. The  Cubans had hoped that a change in their status would have allowed them to move freely, that online publication reported.

Guyana’s Attorney General, Anil Nandlall has said that there are organised people smuggling rings that are moving large numbers of Cubans, Haitians and Venezuelans  through a number of Caribbean nations.

At least 26 Haitians were last week released from police custody pending a High Court hearing and determination of the Guyana government’s decision to deport them because they had allegedly falsified information about their places of stay and intention in Guyana.

The High Court has suspended deportation orders issued by a magistrate and they now await the outcome of their High Court case. Mr. Nandlall said their movements would be monitored.