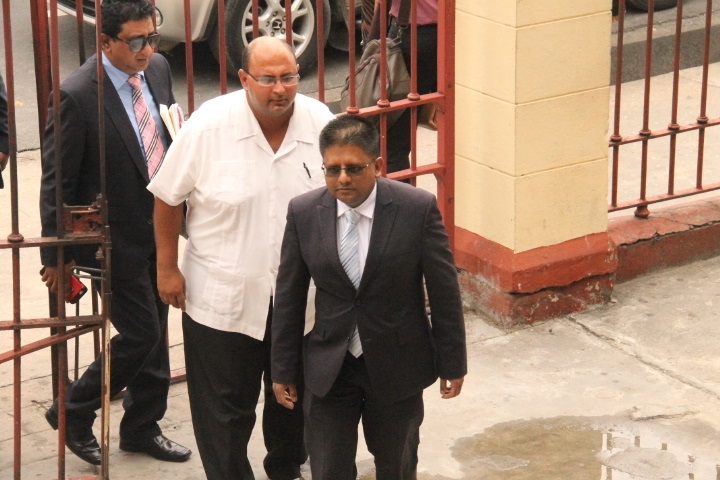 Then former Finance Minister, Dr. Ashni Singh and former Chief Executive Officer of the National Industrial and Commercial Investments Limited, Winston Brassington accompanied by their lawyer, Anil Nandlall as they entered they Georgetown Magistrates’ Court compound on Tuesday, May 8, 2018.

Criminal charges against Finance Minister, Dr. Ashni Singh and Winston Brassington for allegedly “acting recklessly” in the GYD$900 million sale of government lands have been withdrawn.

They had been accused of facilitating the sale of government lands at prices lower than valuations.

The charges of had been instituted in April, 2018 under the then David Granger-led coalition administration against Dr. Singh. It is alleged that he had committed the offences while he had been Finance Minister under the then People’s Progressive Party Civic administration. At that time, Mr. Brassington had been head of the Privatisation Unit and the National  Industrial and Commercial Investments Limited (NICIL).

Dr. Singh, as then Finance Minister and NICIL Chairman- and Brassington on May 14, 2011 by way of an agreement of sale and purchase “acted recklessly when they sold Multicinema Guyana Inc. a 10 acre tract of State land at Turkeyen for GY$185,037,000 without first having procured a valuation from a competent valuation officer.

Similarly, they had been accused of selling 103 acres of state land, by an agreement of sale and purchase, to National Hardware Guyana Limited for GY$598,659,398 (VAT exclusive) with first procuring a valuation. The third and similar charge also had to do with the sale of 4.7 acres of land for GY$150 million to Scady Business Corporation, “knowing that the said property was valued at GY$340 million by Rodrigues Architects Associate, a competent valuation officer.

Several fraud charges against Dr. Irfaan Ali  were earlier this year withdrawn when he assumed the presidency.