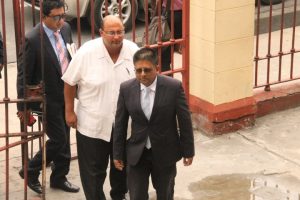 Then Former Finance Minister, Dr. Ashni Singh and former Chief Executive Officer of the National Industrial and Commercial Investments Limited, Winston Brassington accompanied by their lawyer, Anil Nandlall as they entered they Georgetown Magistrates’ Court compound on Tuesday, May 8, 2018.

Chief Justice Roxane George-Wiltshire more than one week ago ruled that the Magistrates’ Court must hear the charges of misconduct in public office against Dr. Ashni Singh and Winston Brassington that had been brought against them under the then A Partnership for National Unity+Alliance For Change (APNU+AFC) administration.

The Chief Justice reportedly handed down her judgement about one week ago, but little had been made known about the decision. It was not immediately clear whether a written decision was available.

Attorneys-at-Law Sase Gunraj and Ronald Burch-Smith confirmed separately that the case against the duo goes back to  the Magistrates Court.  “The practical effect of the ruling is that it returns to the magistrates court,” said Gunraj. Mr, Gunraj said the legal team would be discussing whether to appeal the Chief Justice’s decision. They have about five more weeks to do so.

It is not clear now whether the National Industrial and Commercial Investments Limited (NICIL),under a different government and board, would in reality be leading evidence against Dr. Singh who is now the Senior Minister in the Office of the President responsible for finance.

Mr. Brassington is part of a task force that is planning for the natural gas-to-shore project.

The two had faced three charges in connection with the sale of government lands to local Caribbean and international investors.

Similarly, they are accused of selling 103 acres of state land, by an agreement of sale and purchase, to National Hardware Guyana Limited for GY$598,659,398 (VAT exclusive) with first procuring a valuation. The third and similar charge also has to do with the sale of 4.7 acres of land for GY$150 million to Scady Business Corporation, “knowing that the said property was valued at GY$340 million by Rodrigues Architects Associate, a competent valuation officer.

2020-11-26
Denis Chabrol
Previous: Guns, ammo unearthed; GYD$3.4 million worth of marijuana burnt
Next: Health care workers to get bonus pay, all will be classified as ‘frontline workers’ – President Ali