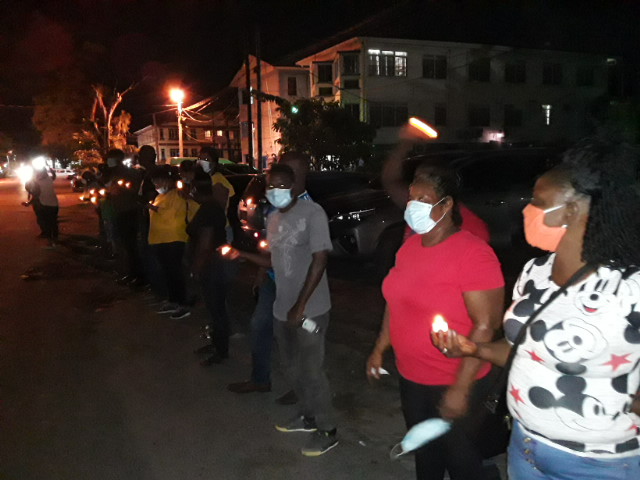 PNCR supporters during a candlelight vigil outside the Brickdam Police Station where James Bond was being held for a second straight night.

People’s National Congress Reform (PNCR) supporters, led by party chairman Volda Lawrence, Wednesday night held a candlelight vigil outside the Brickdam Police station in solidarity with their comrade, James Bond, who was arrested Tuesday as part of a probe into a number of land deals.

“We are basically out here to give support to our comrade, our friend, our brother about whom we believe the police is on a fishing expedition and they are being directed politically,” she said.

He is being held in connection with a government-requested probe into a number of land lease transactions by the National Industrial and Commercial Investments Limited (NICIL).

His Attorney-at-Law, Patrice Henry said as far as he was concerned for the most part the probe against Mr. Bond has been completed after a confrontation with two persons. “He was subjected to two video interviews with two persons who are alleging he received monies from them and had encouraged them to provide an expression of interest. He has denied the allegation and despite the accusation no record or receipt were presented by them. He remains in custody and from all indicators the major part of the investigation against him is completed,” Mr. Henry told News-Talk Radio Guyana 103.1 FM/ Demerara Waves Online News.

Mr. Bond has reportedly maintained that he is innocent of any crimes and that he is willing to take a lie detector test, something that the Guyana Police Force has so far publicly ruled out.

Mr. Bond is a very close political ally of  Ms. Lawrence. She is also facing a number of charges related to alleged electoral fraud in connection with the March 2, 2020 general and regional elections.

The PNCR Chairman said the PNCR is united in its support for Mr. Bond, a man well-known for his open and frank criticism of his party’s leader, David Granger, in handling the March 2, 2020 general and regional elections and the exclusion of a number of senior party leaders from Parliament.

Ms. Lawrence sought to allay concerns that her party is fractured, referring to Tuesday night’s statement by Opposition Leader Joseph Harmon. “The Leader of the Opposition did make a statement on it and that shows, my presence here and other leaders’ presence here and at CID (Criminal Investigations Department) that we stand united for our comrade,” she said.

The PNCR Chairman stuck to her position that her party was united, despite the fact that sources have said that its Central Executive had been forced to issue a statement concerning her repeated questioning by police after concerns had been raised that the party had been silent.