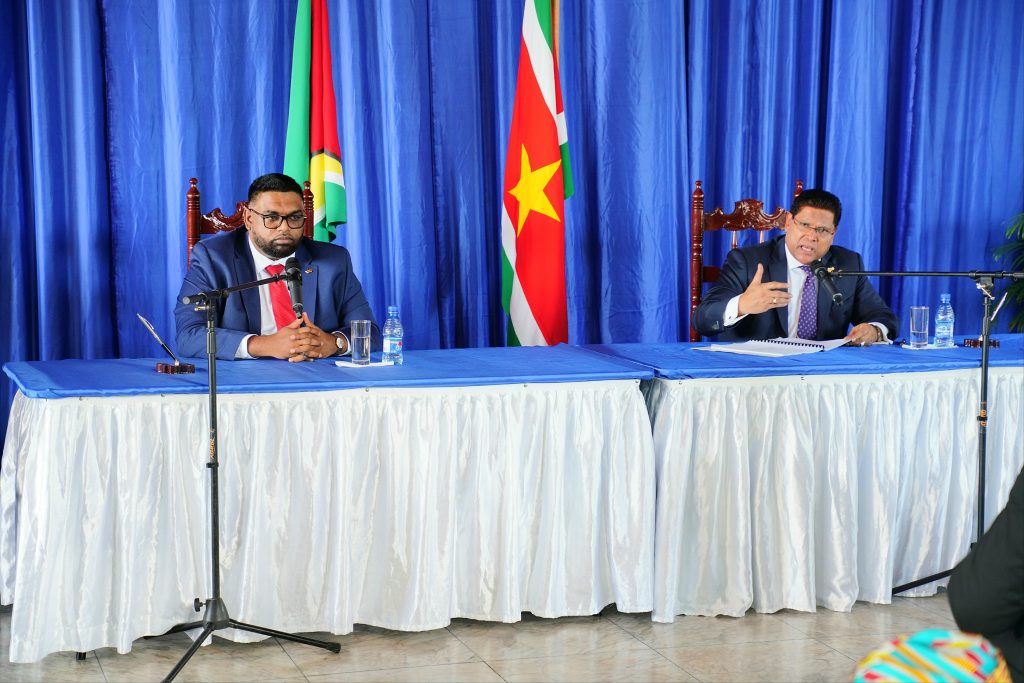 Guyana and Suriname have agreed to jointly woo international investors to build a bridge across the Corentyne River to link the two  neighbouring South American countries and construct a US$1 billion offshore base to support their huge oil discoveries, Suriname’s President Chandrikapersad Santokhi said Tuesday.

“We said that there will be a call from both nations on asking the international community to express their willingness for the interest they want to express for the feasibility study, the design, the build, the maintenance, financing and so forth; that we will do it jointly,”  said the Dutch-speaking Santokhi.

Speaking at a joint news conference with visiting Guyana President, Irfaan Ali, the Surinamese leader said a decision on how to proceed would be made based on the expressions of interest.

Similarly, Mr. Santokhi said the joint Guyana-Suriname Working Group on oil and gas would explore the best option to build the more than US$1 billion offshore base to serve oil exploration companies that have found more than 10 billion barrels of oil equivalent in the Guyana-Suriname basin to date. “That’s an opportunity to look at such a huge project jointly that will extend also to the private sector so that we can have a PPP (public private partnership) approach and to see what we can achieve with that dialogue,” he said.

President Santokhi said the Working Group has been mandated to give him and President Ali the “best advice”. He was optimistic that the expression of interest for the offshore base would be issued in the coming days.

Mr. Santokhi said a joint investment committee would interface with investors that are interested in opportunities in both nations in the areas of trade, investment, infrastructure, development and other forms of cooperation.

The Presidents of Suriname and Guyana said they have decided to forge ahead with mutual development efforts while the Border Commission examines ways of resolving the colonial-era border dispute over the New River Triangle. “We have to allow the commission to do its work at the technical level and, of course, when they are ready and when they finalise their work, they will bring their recommendations to us and to speak prematurely on a work that is ongoing is not doing justice to the commission itself so what we are focusing on,” Dr. Ali said.

“It is on the political agenda, it is part of the platform for the high-level dialogue  and the experts will continue to have the dialogue in that Border Commission and sure when the time would be there it will come on the agenda of the two presidents but on the other side we have high priority for also the issues which are binding us,” said Mr. Santokhi, a former Minister of Justice and Police.

Based on Suriname’s interpretation of the origin of the Corentyne River, that former Dutch colony is claiming the New River Triangle whose area is about 3,000 square miles or 15,600 square kilometers.

Back in 1969, Guyanese soldiers retaliated to gunfire by uniformed Surinamese in the New River Triangle. The Surinamese fled, leaving behind a partly completed airstrip, a camp underground bunkers especially constructed to protect against shell and mortar attacks and was equipped with towers and machine-gun emplacements, a Caterpillar bulldozer, a jeep, an electric power plant, a mechanical water pump, power driven hand saws, a large refrigerator and well-stocked kitchens.

The Guyana-Suriname maritime boundary dispute was settled by the United Nations Tribunal on the Law of the Sea in September 2007, essentially awarding Guyana the area that its eastern neighbour had claimed.