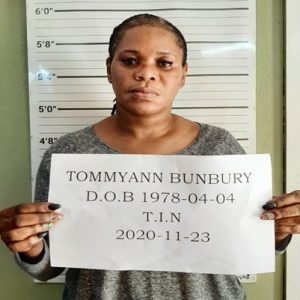 A Guyanese food vendor , who lives in Suriname,  has been arrested in connection with the discovery of 1.9 kilogrammes of cocaine in her luggage shortly before she was due to board a flight to New York, the Customs Anti-Narcotics Unit (CANU) said on Tuesday.

The mother of seven has been identified as 42-year old Tommy-Ann Bunbury  and  her address in Guyana has been given as 10 Victoria Road Plaisance, East Coast Demerara. She told investigators that she is a food vendor at Downtown café Wiek Straat Paramaribo, Suriname and she resides at Condor Straat #1 Paramaribo, Suriname

CANU said the woman was arrested in the evening of Monday, November 23 after agents discovered the suspected cocaine “neatly concealed in cavities in a book”, make-up, personal items and office stationery. “The Officer conducted a search on two suitcases and on her carry-on piece and a number of objects were probed including hard cover book, hand bag, make up kits, deodorants, nail polish covers, mascara and permanent markers and whitish substances suspected to be cocaine emanated from the said objects,” she said. 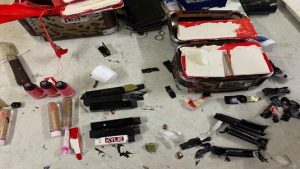 The items in which CANU agents said the found the cocaine.

The woman, said she has been living in Suriname for the past six years and periodically returns to Guyana to fulfil immigration obligations, was an outgoing passenger booked to travel  to JFK New York via Eastern Airlines. She travelled from Suriname to Guyana recently to embark on the flight.