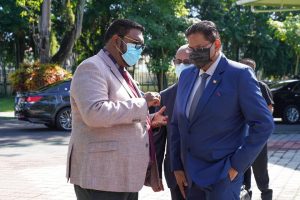 President Irfaan Ali will be paying a three-day official visit to neighbouring Suriname to mark that country’s 45th independence anniversary.

Starnieuws reports that he will leave Guyana Monday evening and will return on Thursday.

As guest of honour, he will be the only visitor to address a special sitting of Suriname’s National Assembly.

President Al and his Surinamese counterpart, Chandrikapersad Santokhi will sign several cooperation agreements after a formal meeting on Tuesday.

He will be accompanied by, among others, Attorney General and Minister of Legal Affairs, Anil Nandlall.

Suriname broke colonial ties with The Netherlands on November 25, 1975.