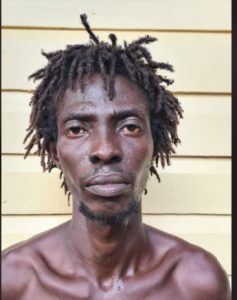 Mitchell appeared at the Port Kaituma Police Station where the charge of murder was read to him via zoom,. He was not required to plead and was remanded to prison until February 2, 2021 for the preliminary inquiry to begin.

A preliminary inquiry by the Magistrates’ Court determines whether there is sufficient evidence for someone, who has been charged indictably, to face trial by a High Court judge and jury.

Investigators were informed that about midday Saturday, the girl and her mother went to a shop , purchased rum and began drinking in the company of a man and others.

At about 3 PM on November 14, the woman and her teenage daughter became drunk after buying more rum and some rice. Police said the woman, her daughter and the man left for home.

The shop owner said the girl’s mother went to his shop sometime later and spent a little while there.

Investigators said on November 15 at about 7:30 AM, the body of the teenage girl was found lying motionless behind their dwelling quarters.