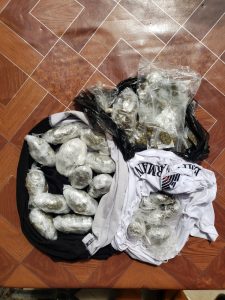 The marijuana that police said they found in the possession of two people in a hotel room at Mahdia.

A welder from West Ruimveldt and a businesswoman of Pouderoyen have been arrested in Mahdia for allegedly being in possession of a quantity of marijuana.

They were held this morning at about 9:30 at a hotel at 111 Miles Mahdia, Potaro River allegedly with 500 grammes of marijuana.

The woman has since admitted ownership of the marijuana while Boodhoo has denied. They remain in police custody.

Police say the marijuana was found in four  transparent plastic parcels, containing a quantity of leaves, seeds and stems suspected to be marijuana were found in a microwave.

More of the suspected narcotic was found in 12 other transparent plastic parcels wrapped in a gray and black Jersey which was in the hotel’s refrigerator.