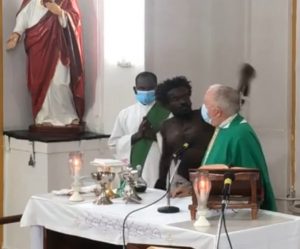 The man hitting Bishop Francis on his head after robbing him of his ring.

A man, believed to be of unsound mind walked up to Roman Catholic Bishop, Francis Alleyne  and  assaulted and robbed him while he was presiding over Mass at the Cathedral of the Immaculate Conception on Brickdam, Georgetown.

Armed with what appeared to be a sharp pointed object, the man walked up to Bishop Alleyne and Deacon Francis. He then grabbed the Bishop’s right hand and dragged off the ring before grabbing two other items including the Mass Book.

The incident unfolded on Facebook as the Bishop and Deacon Francis were celebrating Mass.

Bishop Alleyne and Deacon Francis, nevertheless, continued despite the incident, but sources said they were a bit shaken by the incident. 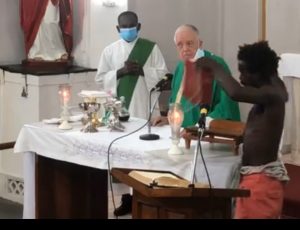 The man then grabbed the Mass Book before leaving.

Persons of unsound mind and the destitute are sometimes seen in and around the Cathedral.