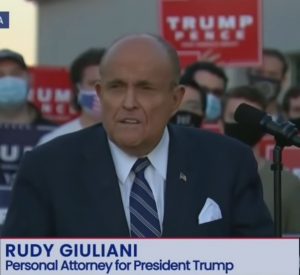 The Republican Party- under the Donald Trump presidency that had repeatedly called on then Guyana President David Granger to concede defeat despite concerns about electoral fraud- is now citing similar concerns in this week’s United States election.

Personal Lawyer for President Trump, Rudy Giuliani Wednesday night charged that thousands of mail-in ballots countrywide could not have been verified and that dead people had voted in Pennsylvania.

The United States (US) had imposed visa sanctions on several Guyanese officials and had called on then President David Granger to step aside, respect the results of the national  vote recount and allow for a peaceful transition of power to the People’s Progressive Party (PPP).

Mr. Giuliani also claimed that thousands of votes have not been verified because Democrats had essentially prevented Republican party representatives from actually seeing whether the ballots had been signed and postmarked. Such a situation, he said, opened up the possibility of multiple fake votes.

Guyana’s  now opposition A Partnership for National Unity+Alliance For Change (APNU+AFC) had claimed that the recount had uncovered thousands of voter impersonation of dead people and migrants as well as the absence of key documents to verify ballots found in ballot boxes. Except for Region Four, the Statements of Poll for the nine other electoral districts had matched. The national vote recount results showed that the Guyana Elections Commission’s declarations for Region Four had been bloated in favour of APNU+AFC.

Mr. Giuliani said the law governing mail-in ballot system provides for verification by representatives of the Democrats and Republicans, but Republican representatives in some instances have not been allowed to verify the ballots. “That 120,000 should come out,” he said in reference to one instance.

Insisting that President Trump has won the election, Mr. Giuliani said more lawsuits would be filed in several States and possibly in the Federal court. “Voter fraud is one of the biggest because that’s how you keep your power but we are not gonna let them get away with it. They’re not gonna steal this election. This election is decided by the people,” he said.

The Republican Party, he said, would fight to expose voter fraud by the Democrats.