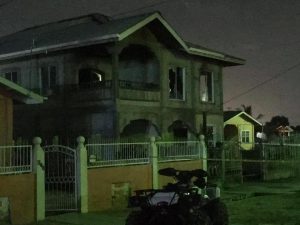 The house at Eccles, East Bank Demerara where the badly burnt bodies of Leeroy King and his partner, Cindy Moses, were found after a fire.

A man and his reputed wife were Tuesday night burnt to death in their house at Eccles, East Bank Demerara; an incident that police said they are treating as a murder suicide.

“Enquiries disclosed that around 19:15 hours Leeroy came home and his reputed wife came to the gate and opened the door for him, shortly after one of the neighbours claimed that she heard screams coming from the said house and what appeared to be loud explosion before seeing fire emanating from the upper flat of the north eastern side of the said building,” police said.

After firefighters extinguished the blaze, police  said they entered the house and observed the bodies of both persons lying on a bed in a bedroom on the north eastern side of the upper flat of the building.

“The bodies were burnt beyond recognition,” police said.

The incident occurred three days after the coupled moved into the neighbourhood . They previously resided at Diamond, East Bank Demerara.