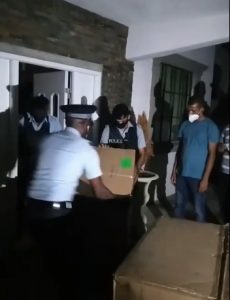 Claiming that several senior police ranks unlawfully searched his home and seized several barber chairs and air conditioning units in violation of his constitutional rights, APNU/AFC Member of Parliament, Christopher Jones has filed a lawsuit seeking damages in excess of GYD$300,000. He is also asking the High Court to order the return of his property valued at almost GYD$5 million dollars.

Lawyers for Mr. Jones- Nigel Hughes, Ronald Daniels and Kezia Williams- claim that the Guyana Police Force violated their client’s civil rights when they searched his home and detained his property which were in breach of a conservatory order restraining them from doing so. More specifically, the lawyers contend that the actions of the police ranks violated Mr. Jones’ constitutional rights set out in Articles 40, 142 and 143 of the Constitution of Guyana.

In a Statement of Claim filed by the three lawyers on August 31, 2020 at the High Court in Demerara, the Respondents are listed as Acting Commissioner of Police Nigel Hoppie; Crime Chief Wendell Blanhum; Inspector Rodwell Sarrabo; Assistant Superintendent of Police Chibanauth Singh; Corporal Singh and the Attorney General.

Jones in the claim says that on August 20, 2020 at around 18:30 hrs, during a power outage, the police ranks, who were armed, cordoned off his home and demanded entry without providing any lawful reason. On top of that, Jones said that the ranks failed to produce a search warrant, and as such he denied them access to his premises.

Thereafter, Mr. Jones, who served as Sports Director under the previous Government,  stated that he applied and was granted a conservatory order by the High Court restraining the police ranks from entering into his premises. Despite being served with the order, he added that the ranks trespassed on his premises on August 21, 2020 at around 00:30hrs by jumping the fence.

According to Mr. Jones’ lawyers, this is arbitrary and was done without any authority or lawful excuse or justifications. Outlining the particulars of his unlawful arrest and detention, the lawyers contend that the police ranks detained their client without any lawful excuse or authority and held him in custody at the Brickdam and Golden Grove Police Station, East Bank Demerara.

Moreover, Mr. Jones is also seeking an award for exemplary damages as he argues that the execution of the search, entry and arrest were violent, aggressive, arbitrary, unconstitutional and devised to invoke, and did invoke fear into him and his family.

Having regards to the foregoing, Mr. Jones is asking the court to declare that his constitutional rights were breached. He is also asking the court for interest on all damages awarded; costs; and any such further or other orders the court sees fit in the circumstances.

Mr. Jones has at all times maintained that the items belonged to him. As a matter of fact, he had released documentation showing that he had formally applied for assistance from the Sustainable Livelihoods and Entrepreneurial Development (SLED) programme to purchase the barbershop equipment.

He said the items were to furnish a barbershop that would be built on Aubrey Barker Street, South Ruimveldt, Georgetown, creating employment for 22 persons.

As police conduct investigations into simple larceny allegedly committed by Jones, he is out on GYD$100,000 station bail. Ranks from the Major Crimes Investigations Unit are spearheading the investigation.