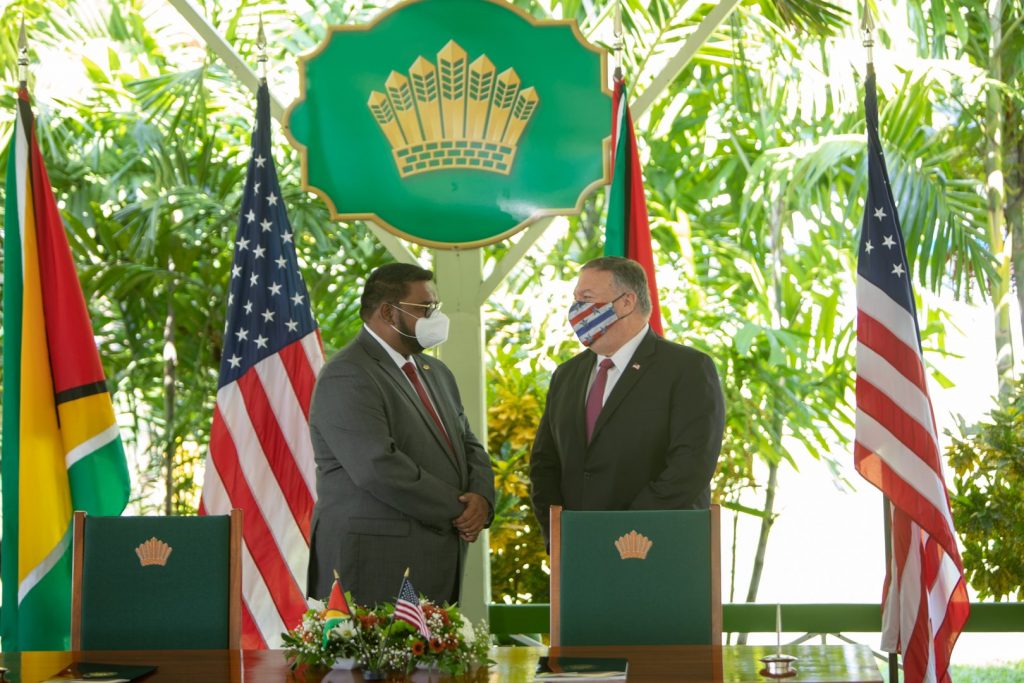 President Irfaan Ali and US Secretary of State Michael Pompeo in discussions at the Baridi Benab, State House, Georgetown, Guyana.

President Irfaan Ali on Friday said the Shiprider Agreement  would not be used by the United States (US) to conduct covert operations against Venezuela through Guyana’s territory under the guise of anti-narcotics operations.

Speaking with the media shortly after exchanging notes for the activation of the 19-year old Shiprider Agreement from next Monday, the President referred to the protocols that have been agreed to for the US’ entry into Guyana’s maritime and airspace. “That should not be any fear because the agreement points out specifically about the modus operandi that has to take place before the engagement and the involvement of the Government of Guyana and we are not involved in that and this agreement is to help us in our sovereignty issue; it will help us automatically if we have greater assets in the water but it also gives us that ability to protect our Exclusive Economic Zone,” he said.

The President disagreed with suggestions that Guyana would be facing a risk by allowing American military personnel into Guyana’s maritime and air spaces to engage in counternarcotics and interdiction operations. “No I don’t see that putting us at a risk. As a matter of fact it helps us in capacity building, it helps us in technology transfer, it helps us with assets to protect our Exclusive Economic Zone against drug traffickers, narco-traffickers.” he told reporters shortly after holding a joint press conference with US Secretary of State Michael Pompeo.

Permanent Secretary of the Ministry of Foreign Affairs, Ambassador Audrey Jardine-Waddell, in brief remarks at the exchange of notes on the Shiprider Agreement, said the rules would require Guyana’s approval. “Operations will not be carried out in Guyana’s waters unless permission is granted by the Government of Guyana. Similarly, overflight requests for law enforcement activities will be granted once the reasonable notice and communication channels are provided to the appropriate Guyanese authorities,” she said.

The Permanent Secretary added that Guyana and the US would, under the agreement, establish a “combined law enforcement Shiprider programme” between their law enforcement agencies.

Mrs. Jardine-Waddell  that that accord would allow for cooperative operations at sea and to fast-track overflight clearances for law enforcement aircraft  when combating illegal drug trafficking. She said the “improved bilateral procedures” would be based on the principles of international law, respect for the sovereign equality of States and full respect of the principles of freedom of navigation.

Against the background of Guyana endorsing US-sponsored statements at the Lima Group and the Organisation of American States on the need for free and fair elections in Venezuela, President Ali said his government was interested in democracy and the welfare of people.  “Guyana is very clear on its position to Venezuela and our position is not a secret… We support democracy and free and fair elections and we support democratic transition wherever it has to take place. Our concern has always been about people, their welfare and ensuring that people don’t suffer in any process,” he said.

Secretary of State Pompeo thanked Guyana for its support in the international fora against the Nicolas Maduro dictatorship. “We talked about the need for democracy in Venezuela and an end to the illegitimate Maduro regime; the man that is denying the very democracy that the Guyanese people so love , denying that democracy for the people of Venezuela. You have been a strong partner for us on this issue. You have supported the statements through the Organisation of American States and through the Lima Group”

2020-09-18
Denis Chabrol
Previous: Shoemaker stabbed with his needle, robbed of cash
Next: OPINION: America came out ahead; Guyana fell farther behind