US Secretary of State arrives in Guyana amid tight security, continued scepticism 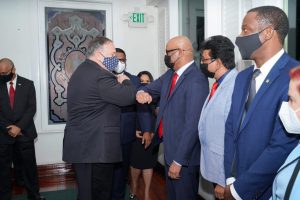 United States (US) Secretary of State Mike Pompeo arrived in Guyana late Thursday afternoon on a whirlwind four-nation  South American tour, under tight security and lingering scepticism about whether his visit is linked to plans for eventual regime change in Venezuela.

Despite clear assurances by Vice President Bharrat Jagdeo that the People’s Progressive Party (PPP) would not sacrifice Guyana’s territorial integrity and sovereignty, the Marxist-oriented Working People’s Alliance (WPA) stopped short of naming private sector organisations, the small political parties and Caribbean Community (CARICOM) leaders who had been clamouring for the use of the  national vote recount figures to declare the results of the March 2, 2020 general elections.

“WPA notes that many of those local and regional forces which wittingly and unwittingly supported the recent regime change in Guyana are silent on the Pompeo visit and the possibility of the country’s support for interference in Venezuela’s internal affairs. Should the government take Guyana into the conflict, these forces must bear equal responsibility for the consequences,” that party that was a  member of the now opposition coalition of A Partnership for National Unity+Alliance For Change (APNU+AFC) said in a statement.

The coalition has not issued a statement concerning the visit , but has expressed concern that several of its questions to Foreign Affairs Minister Hugh Todd that were tabled in the National Assembly this week were not allowed because they did not qualify as urgent or related to the business of the House. The 2020 National Budget is being debated this week.

The Guyana government has said very little on its  own about the agenda of the meeting, but  the US State Department has indicated that Mr. Pompeo’s focus would be in inclusive and transparent governance in Guyana’s diverse society, activation of the 19-year old Shiprider Agreement to allow for joint US-Guyana marine and air patrols to interdict drug traffickers and supporting Guyana’s efforts to cope with Venezuelan migrants who have been fleeing the worsening political, social and economic crisis in their homeland by the socialist Nicolas Maduro administration. 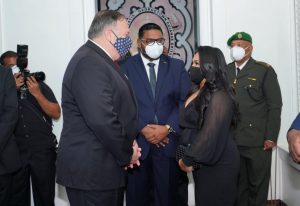 US Secretary of State Mike Pompeo in conversation with President Irfaan Ali and the First Lady.

The WPA warned that if Guyana becomes entangled in US efforts to force Mr. Maduro’s removal from office, this country could suffer as collateral damage. “It is a high-risk endeavor that is pregnant with outcomes that would be detrimental to Guyana’s territorial integrity and the country’s security, including its economic security. While we fully understand that having benefited from regime change, the PPP government is under pressure to repay its benefactors, Guyana’s safety is too high a price to pay,” that party said.

The US Secretary of State touched down at the Cheddi Jagan International Airport at 5:08 PM (local time), he deplaned at 5:19 PM and was greeted by Foreign Affairs Minister Hugh Todd and American Ambassador to Guyana, Sarah-Ann Lynch.

Mr. Pompeo’s entourage was escorted by American security personnel, Guyana Special Weapons and Tactics (SWAT) team members and given aerial cover by a Guyana Defence Force (GDF) helicopter.  Most locations where members of the American delegation or Mr. Pompeo was expected to be present were sniffed by local police dogs for explosives.

In Georgetown, several streets around the Pegasus Hotel, Marriott Hotel and State House were cordoned off to cater for Mr. Pompeo’s presence.  He attended a State Dinner that was hosted by President Irfaan Ali and his Cabinet.

Secretary of State Pompeo arrived from Suriname and he is expected to leave Guyana on Friday for Brazil before going off to Colombia and then returning to the US.