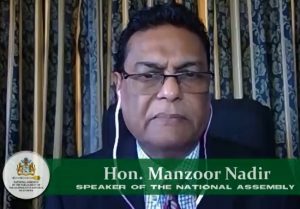 House Speaker Manzoor Nadir on Wednesday said several government and opposition parliamentarians as well as Parliament Office staff were sickened by food supplied to them on Monday, but that steps were being taken to avoid a recurrence.

He told the sitting on Wednesday that the Clerk of the National Assembly Sherlock Isaacs and a parliamentarian had a “long discussion” with the caterer. “Several suggestions were made and the caterer is currently trying to ascertain the cause of the contamination. Let me assure you that we are taking every step possible to eliminate a recurrence and to give you some answers as to what caused the effects on several members of the National Assembly,” Mr. Nadir said.

The House Speaker said those falling sick as a result of consuming the food supplied to Parliament included opposition A Partnership for National Unity+Alliance For Change (APNU+AFC) parliamentarians, Deputy Speaker Lenox Shuman and government parliamentarians.

The issue was first raised publicly on Tuesday by Opposition Leader Joseph Harmon on Tuesday when he explained the absence of APNU+AFC parliamentarian Amanza Walton-Desir in seeking a clarification on her behalf concerning her questions to Foreign Affairs Minister Hugh Todd.