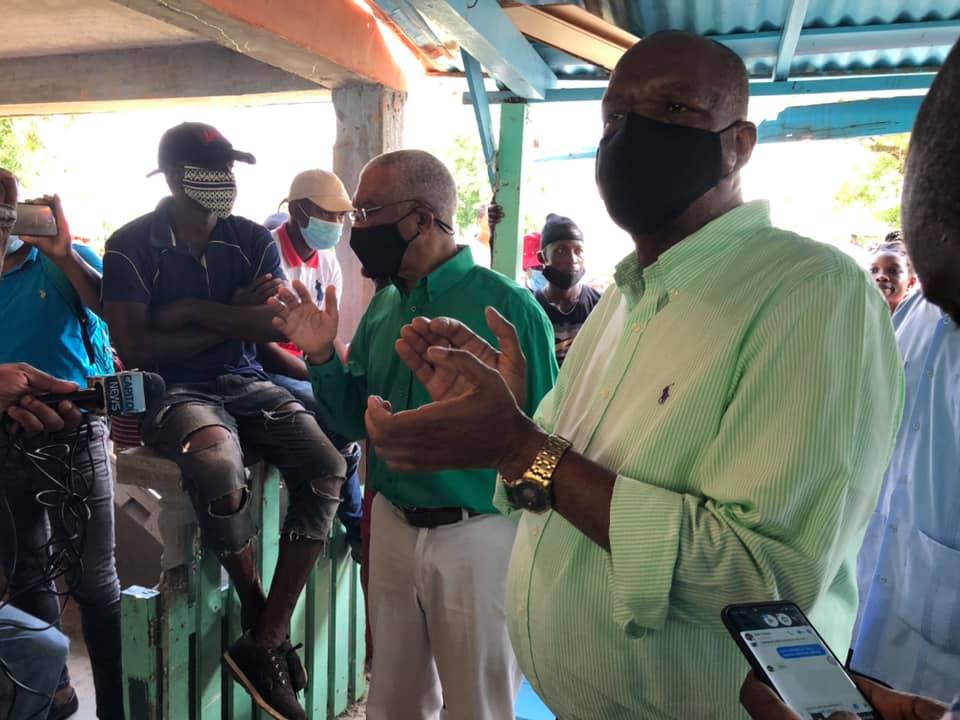 “Unfortunately, Messrs Granger and Harmon descended on the communities and in their statements and rhetoric created an atmosphere engendering unfounded suspicions leading to racial polarization and attacks. Further loss of life, injuries and property loss are being experienced!!,’ Mr. Benn said. “Granger and Harmon bear the prime responsibility for the escalation in violence, injuries and death,”  the Home Affairs Minister said.

President Irfaan Ali also condemned Mr. Harmon’s linkage of the protest to a fraudulent government and he said he would be asking the Ethnic Relations Commission to launch a probe. “I am calling on Ethnic Relations Committee (ERC) to investigate the statement of Mr. Joseph Harmon, the statement that was inciteful and filled with hate. This is not the type of leadership our country needs at this time when we are trying to heal and bring communities together,” Mr. Ali said.

The President said Mr.Harmon’s statement was unhelpful to the situation. “For a matter of fact, it is his statement that would have ignited the situation on the ground. Calling this a struggle against a fraudulent government and oppression tells you the extent to which Mr. Harmon is trying to misuse the circumstances that surround us as a nation,” he said.

The Guyana Police Force could not immediately corroborate claims by President Ali that people were also being raped during the now three-day old unrest. Dr. Ali said he has been assured by the Joint Services that they would not tolerate any criminal behaviour including arson, robberies, assaults under the guise of protests.

Mr. Benn and Dr. Ali’s comments came just hours after 17-year old Haresh Singh was killed and his motorcycle burnt as he was on his way to his farm in the backlands of Number Three Village, West Coast Berbice. Police say they are investigating Singh’s killing with the same intensity as they are for Isaiah and Joel Henry whose mutilated bodies were found aback Cotton Tree Village, West Coast Berbice last Sunday.

While the Home Affairs Minister said the “escalation in violence rest squarely at the doors of these two gentlemen and specific known political agitators of their ilk,”  Opposition Leader Harmon was earlier Wednesday in West Berbice urging people to engage in peaceful protests and telling them that the coalition does not support racially-motivated attacks.

Mr. Benn reiterated that the murder and mutilation of the Henrys remain a heinous crime which has been condemned all across Guyana.

The father of the murdered youths has repeatedly said that he will not support attacks on people of other races, amongst whom he has blood relations and friends, but is requiring justice at the hand of the authorities!

Swami Aksharananda, in a statement on behalf of the 108 Temples Organisation of Guyana, noted “with horror and disbelief the murder” of the Henry cousins and called on the police force to apprehend those culpable.

“With the rest of this nation, we condemn this unspeakable atrocity and call for the police to do everything in their power to find the perpetrators and have them brought to justice. Nothing in our mind can justify this level of insane brutality,” the Hindu organisation said. The 108 Temples Organisation prayed with families, relatives and others “in this dark and terrible moment. May God grant all of you the fortitude to endure your pain.”

The Muslim Youth Organisation (MYO) said while it’s easy to cast aspersions to the motive behind these murders absolutely nothing justifies it. “The Muslim Youth Organisation of Guyana condemns the savage murder of the two teenage cousins Isaiah Henry and Joel Henry. We further extend our heartfelt sympathies to the families of these two young men whose lives were snatched out with such brutality,” that organisation said.

The MYO called on police to speedily solve the crime and bring the perpetrators of this inhumane act to justice swiftly, and urged the protesters not to break the law.  We further appeal to the protesters not to indulge in any form of criminality such as robbing or beating others; this only harms the noble cause in which you are involved in.,” the MYO added.

Synod Moderator of the Guyana Presbyterian Church, Reverend Vernon Ramcharran joined with political and other religious leaders in denouncing the butchering of the Henrys, domestic violence and the “ugly face” of racism.  He also appealed for patience as police continue their investigations. “Please allow the law enforcement officials and the legal justice system to perform their duties and bring swift justice for all our citizens,” he said.

2020-09-09
Denis Chabrol
Previous: APNU+AFC does not support “Black and Indian fighting”- Harmon
Next: Protesters kill man who opened fire on them- police