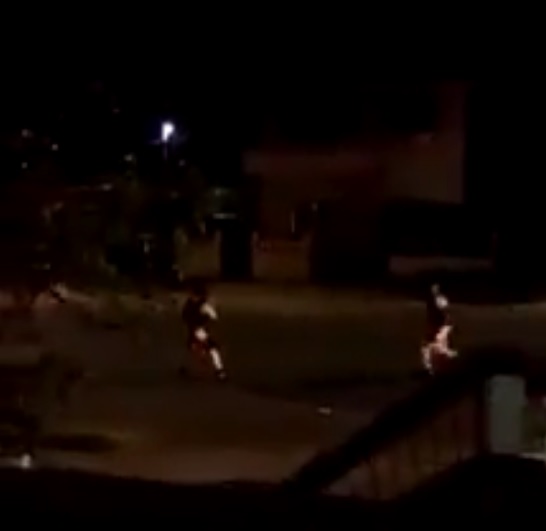 Police Monday night fired teargas and pellets to disperse people on the West Coast Berbice public road, saying that two days of protests against the barbaric killing of two cousins have descended into robberies and other attacks on innocent people.

“After several hours of the roadway being blocked, the police had no alternative but to take all necessary action to ensure that the road is clear,” police force spokesman, Royston Andries said.

Among the injured is A Partnership for National Unity+Alliance For Change (APNU+AFC) supporter, Carol Joseph, according opposition APNU+AFC spokesman, Imran Khan. He provided pictorial evidence,

The Guyana Police Force said that up to 6:30 PM Monday, five people were in custody as police continued their probe into the killing of Isaiah and Joel Henry whose mutilated bodies were found Sunday afternoon in the backlands of Cotton Tree, West Coast Berbice.

Police said they have received several reports of robberies being perpetrated on several innocent citizens and those were being taken seriously. “Additionally, the Force wishes to state that when protest action degenerates into unlawful acts, infringing on the rights of other citizens and putting the protection of life and the safeguard of property at risk, the GPF will consequently take the appropriate action against perpetrators,” the Guyana Police Force said in a statement.

Vehicular traffic going east and west ground to an almost standstill, causing commuters to walk for miles past the hotspot to board other vehicles to continue their onward journeys.

APNU+AFC said in a statement Monday night warned that if police did not heed that political organisation’s call for an end to police action, the crisis could deepen and the administration of President Irfaan Ali would have to bear full responsibility. “The APNU+AFC calls for an immediate ceasefire and for the police to desist from injuring and maiming innocent citizens. To shoot at innocent protestors is provocation and incitement by the police and will, in all likelihood, result in a response which the fraudulent and illegitimate PPP government will be held totally and ultimately responsible for,” the coalition said.