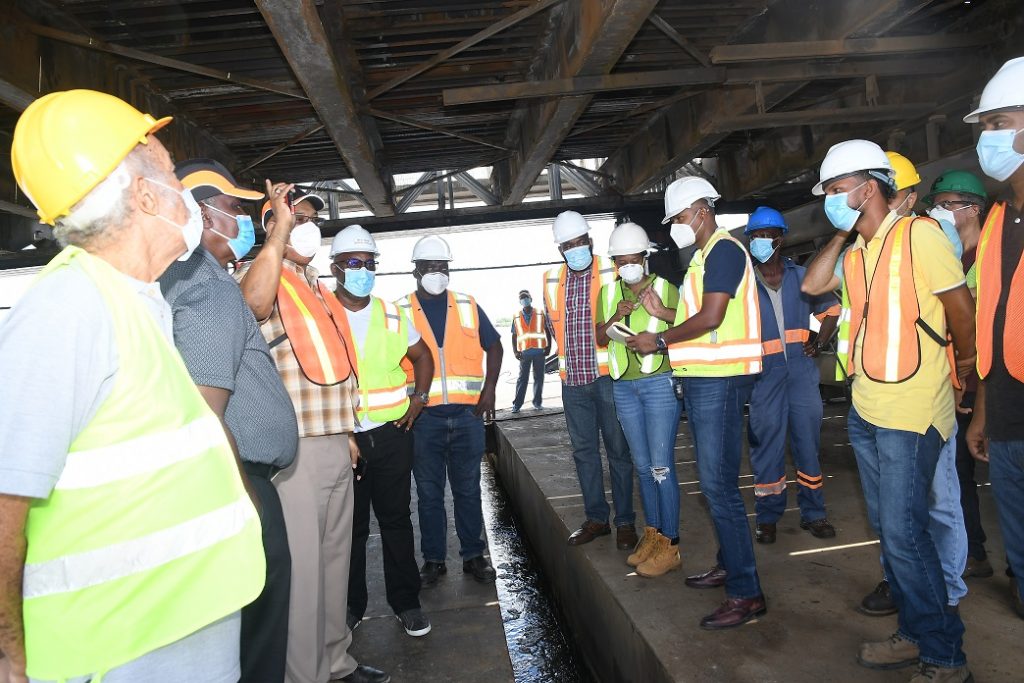 The high-level team at the Demerara Harbour Bridge.

The retractor span at the Demerara Harbour Bridge has developed major problems and officials say after Sunday morning at 8:30, marine traffic will be unable to pass for “a few days.”

The Ministry of Public Works said the bridge would be retracted under the supervision of engineers to allow marine traffic to pass. “After this opening, marine traffic will be unable to pass for a few days since aggressive work will be untaken,” the Ministry said.

Interruption of vehicular traffic will be announced by the management of Demerara Harbour Bridge in a timely manner. The Ministry of Public Works said a barge might soon be deployed to move heavy duty vehicles between East and West Demerara.

Motorist are asked to strictly observe the speed limit which is currently 20 mph.

Following a meeting convened by Public Works Minister Juan A. Edghill,  a high-level team has been assembled to oversee and assess the works. “The high-level Team will continue to conduct daily reviews and if needs be, twice daily, so as to ensure that the works to be done are completed in a timely manner taking into account the importance of this structure and its necessity to commuters,” government said.

The Minister of Public Works, according to the minister’s statement, will continue to engage the management of DHB and is also appealing to all stakeholders, marine vessels and motorist to be patient at this time.

The Public Works Ministry said the deteriorating “structural integrity” of the Demerara Harbour Bridge was known since 2016 and the matter was raised several time by the engineers to the then Ministers of Public Infrastructure, David Patterson and Jaipaul Sharma, as well as, the Minister of finance.

“Minister Edghill expressed disgust at the recklessness, mismanagement and maladministration that caused such neglect leading to this current situation,” the Ministry of Public Works said in a statement.

2020-09-06
Denis Chabrol
Previous: Justice For All Party pulls out of APNU
Next: Elderly GECOM security guard beaten to death