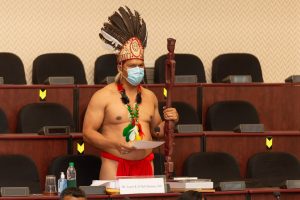 Lenox Shuman taking his oath as a parliamentarian.

The opposition A Partnership for National Unity+Alliance For Change (APNU+AFC) on Tuesday railed against the government using its 33-seat majority to hand the post of Deputy Speaker of the National Assembly to a politician whose party got just over 2,000 seats at the March 2, 2020 general and regional elections.

APNU+AFC front-bencher Cathy Hughes said the decision by the 31 opposition parliamentarians to walk out of the House sitting was in protest over the People’s Progressive Party Civic (PPPC) occupying the government seats on what the coalition maintains were fraudulent elections as well as the appointment of  Leader of the  opposition Liberty and Justice Party (LJP), Lenox Shuman as Deputy Speaker.

Opposition Leader Joseph Harmon highlighted that the election as Deputy House Speaker amounts to a conflict of interest because he is a government ministerial advisor.

Mr. Shuman is civil aviation advisor to the Minister of Public Works.

Mrs. Hughes questioned how Mr, Shuman, who has betrayed his intent to be vigilant against government excesses, could perform his role as Deputy Speaker fairly. She noted that the post of Deputy Speaker is always held by the opposition. “We find it unacceptable, at a time when we should be working together and we have unity, that you would allow a man, who has over 2,000 votes, to represent a group of people in opposition that amassed more than  217,000 votes; it is unacceptable,” she said. Mrs. Hughes stressed that Mr. Shuman could not have won a seat on his own but had needed other parties to help hi,

The LJP secured 2,657 votes. Under the joinder system,  LJP, A New and  United Guyana (ANUG) and The New Movement (TNM) won a combined total of 5,214‬ votes and have decided to rotate their lone parliamentary seat.

APNU+AFC  insisted that the People’s Progressive Party (PPP) came to power on the basis of flawed results and “so we do not accept this government as leaders of this country.” The coalition on Monday filed it s election petitions in the High Court to challenge the credibility of the elections.

Conventionally, the Deputy Speaker is drawn  from the opposition benches. APNU+AFC front-bencher Mr. Raphael Trotman  was nominated by Mrs. Hughes but Prime Minister Phillips nominated Mr. Shuman for that post and it was seconded by Ms. Teixeira then put to the vote.