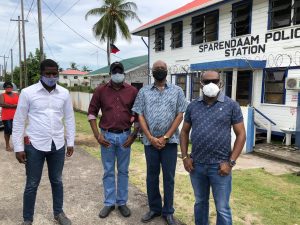 A number of residents of Belladrum, West Coast Berbice on Sunday blocked the public road to vent their anger at the continued detention ad subsequent charging of Region Four Returning Officer Clairmont Mingo.

Divisional Police Commander for  Mahaica-West Berbice, Edmond Cooper said he and a team of policemen were trying to clear the road without causing the situation to escalate.

“We are working on it,” he told News-Talk Radio Guyana 103.1 FM/ Demerara Waves Online News.

Vehicular traffic was prohibited from passing along that section of the east-west corridor, as news broke Sunday morning that Mr.  Mingo was charged by police with four counts of misconduct in public office. If the lower court finds that there is sufficient evidence for him to face trial by a High Court judge and jury and he is convicted, the law states that he can be sentenced to life imprisonment.

Incoming Opposition Leader, Joseph Harmon stopped short of endorsing protest action by residents even as he railed against police presence in the village after a bout of protests last week when Mr. Mingo was arrested. “We are fully supporting them (Mr. Mingo’s wife and brothers) , we are supporting the village and we will not allow our supporters and for that matter any Guyanese people to be abused, their rights violated under the direction by this fraudulent government,” he said.

The now incumbent People’s Progressive Party (PPP) has claimed that Mr. Mingo was at the centre of the bloating of tabulated results for A Partnership for National Unity+Alliance For Change (APNU+AFC). Eventually, a national vote recount showed that the PPP won the elections in line with that party’s statements of poll.

Opposition supporters at Paradise, East Coast Demerara also protested on Saturday against the continued detention of another GECOM official who resides in that area.