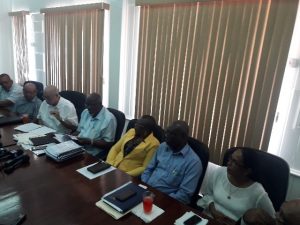 Members of the Ethnic Relations Commission

Mayor of Bartica Mr. Gifford Marshall has made a list of 14 people who have been asked to meet with the Ethnic Relations Commission (ERC) to discuss pending matters with regards to alleged racially insensitive comments they may have made.

The ERC said Tuesday that Marshall and three others, Dennis Emanuel, Chaitram Goberdhan and Balmikie Lallbeharry were previously contacted and asked to visit the organisation but failed to do so. The ERC therefore issued another appeal for them to meet with officials on Tuesday, August 25, 2020 at 10 a.m.

These persons are asked to visit the ERC’s office located at 66 Peter Rose and Anira Streets, Queenstown, Georgetown.

During the recent election and recount, the organisation has had reasons to call a number of persons in to warn them against making racial comments particularly on social media. In fact, one social media commentator was sternly warned by the ERC who later apologised for making racially insensitive remarks against Guyanese of African and Indian descent, and even Christians.

According to the laws of Guyana, anyone found responsible of inciting racial hatred or violence against any person or against any segment of a society can be prosecuted under the Racial Hostility and Representation of the People Acts.

ERC is a constitutional body established to promote ethnic harmony and security in Guyana.