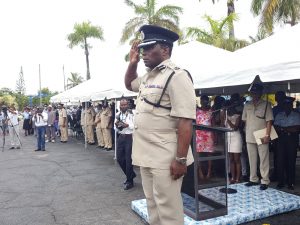 The one-liner came hours after reports had surfaced in sections of the media that Mr. Williams was sent on leave in the “public’s interest.”

Home Affairs Minister Robeson Benn did not immediately respond to queries in this regard.

Mr. Williams was a one-time hopeful for the post of Police Commissioner but then President David Granger had instead opted to appoint Leslie James.

More than three years ago, then Police Commissioner Seelall Persaud had been sent on leave in the public interest by the then David Granger-led administration.

The announcement by the Guyana Police Force about Deputy Police Commissioner’s status  is the first concerning the high-command of the civilian law enforcement agency.

The Police Force has not officially issued any statement about whether substantive Police Commissioner Leslie James and Deputy Police Commissioner Maxine Graham have proceeded on pre-retirement leave. Also, there has been no official announcement by the Police Force about the re-posting of Superintendent William Blanhum from Region One to Criminal Investigations Department as Crime Chief.

Repeated efforts to get an update from the Police Force spokesman , Royston Andries on changes in the high-command  have not been successful. A promised statement has not been forthcoming to date.