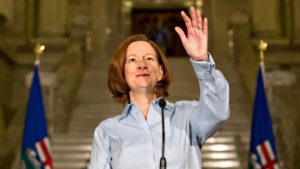 Minister of Natural Resources  Vickram Bharrat on Sunday shrugged off concerns about Canadian consultant Alison Redford being at the helm of a team that has been hired to review work done on ExxonMobil’s Field Development Plan for the Payara oil field because she has been fingered in alleged misuse of public funds in her home country.

“Some of the criticism I think is a bit unfair. It is politically driven and there are people, who are behind it too  with probably different interests at the same time,” Mr, Bharrat said. “We have confidence in the Canadians and they recommended her so we’re willing to work with her,” he  added. The Natural Resources Minister said President Irfaan Ali would have to be first satisfied with the documents that he would be signing.

Ms. Redford was Premier of the Canadian province of Alberta from 2011 to 2014 when she resigned amid a report by the Auditor General that had found that she had misused government planes and had included fake passengers so that she could have flown alone. She had been also ordered to repay CDN$45,000 cost of a trip to South Africa for former President Nelson Mandela’s funeral.

Asked whether government was concerned that those reports would cast a shadow on Ms. Redford’s work, the Natural Resources Minister said government could not “run behind what people’s perception is” even as he declined to comment on findings against her by the provincial Auditor General.

Questions have also been raised about Ms. Redford’s competence in this area, but Mr. Bharrat said she would not be developing the FDP but merely reviewing work done by the United Kingdom (UK) company, Bayphase. The Minister assured that government had no suspicions whatsoever about Bayphase’s work but merely wanted to verify and assure itself that Guyana would be getting a good deal. “We don’t have any reason to suspect anything. We just want to ensure that Guyanese would be getting the best,” he said.

Former Petroleum Advisor, Dr. Jan Mangal called on Guyana to object to the hiring of Ms. Redford on the grounds that she does not have any experience in reviewing FDPs. ” I thought the PPP leadership were supposed to be brighter and more competent than the fools in the Coalition.  This is so disheartening. There is no hope for us,” he said.

Initially, President Irfaan Ali and Vice President Bharrat Jagdeo had referred to the hiring of one consultant to review the FDP before approval is given to ExxonMobil, but the Guyana government later said the Bayphase oil and gas review would be done by a team “to be headed” by Ms Redford. Other team members are former the former Deputy Minister of Energy in Newfoundland, Canada, “senior international reservoir engineers” and Mr. Jay Park, QC, Managing Partner of Park Energy Law based in Canada and the United Kingdom.

The Ministry of Natural Resources said the Redford-led team has been hired  team of technical experts would assess progress to date and to assist the Ministry, where necessary to successfully conclude the permitting exercise. “This will require coordination on ensuring that regulations are complied with and that they can be enforced.  This will include environmental standards and reservoir management which is about managing how resources are developed to ensure that the interests of the people of Guyana and their resources are developed in a sustainable and responsible manner to the benefit of the country,” the ministry said.

In a clear effort shore up Ms. Redford’s credibility and suitability for the job, government said she had been hired by the World Bank, United Nations, the Commonwealth and the European Union, helped develop the energy sector in Pakistan, and the renegotiation of the Great Canadian Oil Sands/Syncrude Agreement on behalf of the Canadian provincial government of Alberta. “It must be emphasized that while this is a limited reflection of Ms. Redford and her team’s skills and capacity building abilities, they also have vast knowledge in the field of policies and legal framework that supports accountability and transparency within the Petroleum Sector,” the Natural Resources Ministry said.

The Ministry of Natural Resources said the current review has been undertaken by the Energy Department for more than seven months. The Department contracted Bayphase Oil and Gas Consultants at a sum of US$386,830 which commenced in December 27, 2019. There was a first contract extension (no cost) to July 27, 2020 and a second contract extension to September 27, 2020.

ExxonMobil hopes to get the Guyana government’s green-light to allow it to make its Final Investment Decision by next month.