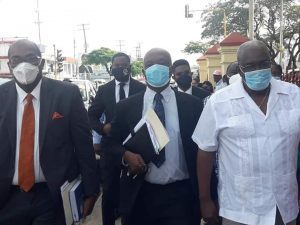 Chief Elections Officer Keith Lowenfield has to return to court on August 24 to know his fate concerning the three private criminal charges connected to the results of the March 2, 2020 general elections.

Magistrate Faith Mc Gusty Hope’s that by that time the Director of Public Prosecutions (DPP) Shalimar Hack will decide whether to take over the three private criminal charges against Mr.  Lowenfoeld , order that they be continued as private charges or discontinue them.

The DPP may also opt to ask the Private Prosecutor Attorneys-at-Law Glen Hanoman for more information before she makes a decision.

Mr. Lowenfield’s Defence Lawyers  Nigel Hughes and Neil Boston asked the Court to consider that the prosecution has not furnished any witness statements to the defence team.

“Mr. Lowenfield has come here when my friend is not even fully aware of the contents of this  case…All of this at the instigation of counsel who was not ready,” Mr. Boston said, adding that he was disappointed that they were ill-prepared or not prepared.

But Mr. Hanoman flayed Messrs Boston, Hughes and other Defence lawyers for requesting the DPP to discontinue the case “although they do not know what the evidence is.”

“The intervention at this stage is abuse,” Mr. Hanoman said.

Attorneys-at-Law Sanjeev Datadin, who is in association with Mr. Hanoman, highlighted that Mr. Hughes’ approach to the DPP “has caused a chain reaction.”

Magistrate Mc Gusty agreed with Mr. Hughes that the trial would continue until the DPP informs the court.

The charges are misconduct in public office, fraud and conspiracy to commit a felony. They were brought against him by Desmond Morean and Daniel Josh Kanhai.

In relation to similar cases against Region Four Returning Officer Clairmont Mingo and APNU+AFC official Volda Lawrence, Mr. Hanoman said the summonses could not be served because the bailiffs are “stick at the gates at Congress Place” headquarters of her People’s National Congress Reform political party.  After Mr. Hanoman remarked that “we understand that she is building a mansion somewhere on the West Coast,” Mr. Hughes asked the Magistrate to urge him to cease making “political statements” in the court.

Those matters were also put down for August 24 by which time Magistrate Mc Gusty would return from leave.

Mr. Lowenfield remains on GYD$450,000 bail pending the outcome of the case.

2020-08-14
Denis Chabrol
Previous: Man stabbed to death, 3 children and 2 sisters injured
Next: Fraud charges against Irfaan Ali withdrawn because he is now President