Millions in damage to public infrastructure due to accidents recorded 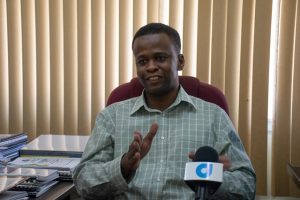 Government has recorded over GYD$22 million in damage to public infrastructure due to accidents with a large portion of that sum falling directly within the East Coast Demerara Public Road Widening Improvement Project.

In light of this, Minister of Public Infrastructure Juan Edghill said he plans to collaborate with the Ministry of Home Affairs, the Guyana Police Force and other stakeholder agencies to ensure improvement in road and traffic safety. Minister Edghill said his ministry would also do its best to improve public education, lighting and enforcement where necessary.

“We have to start finding mechanisms too wherever people are culpable and careless in the use of the road, and they damage infrastructure, whether it is traffic lights, bridges or signage, they have to find a way how they could be surcharged. This to ensure that people are not just damaging things and they are left as a charge to the state,” he asserted.

The minister nevertheless said while serious attention would be given to the issue, what is of more importance to the government is ensuring the safety of the public. “We want to ensure the reduction in the loss of lives. The carnage on the roads must come to an end, because no matter what is damaged, a life is more important than the cost of the infrastructure,” he added.

However, he told News Talk Radio 103.1 FM/Demerara Waves Online News Online that enforcing penalties for these damage could serve as a huge deterrent, explaining that millions of dollars are expended yearly to repair or replace public infrastructure that was damaged due to vehicular accident or vandalism.

While the policy is for persons who damage public property to bear the cost of repair or replacement, the government sometimes faces challenges in identifying the perpetrators. In cases where the perpetrators are apprehended, they most times have to be taken before a civil court to compel them to pay for the cost incurred.

The policy to surcharge reckless drivers for damages was first introduced in Guyana under the People’s Progressive Party (PPP) government in 2009. Provisions for these charges are made under the Administration of Justice Bill which increased the penalties attached to the damaging of public or private property. Should a vehicle damage public property then the owner or driver of the vehicle could pay up to $50,000 or serve a sentence of 10 months in jail.