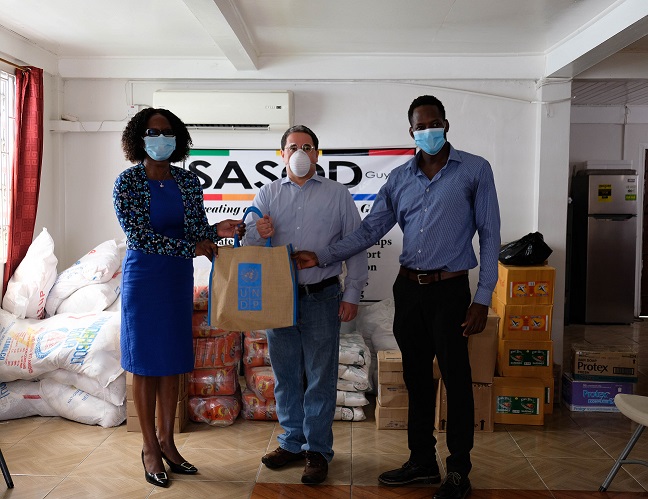 The United Nations Development Programme (UNDP) on Monday said it has provided $5.6 million worth of food items to make available nutritional support to Persons Living with HIV (PLHIV) and members of the Lesbian, Gay, Bi-sexual and Transgender plus (LGBT+) community in Guyana.

“PLHIV and LGBT+ persons are among the most vulnerable and marginalized in any society. At the time of COVID-19 and its mandatory containment measures, the challenges facing these groups are further exacerbated. Given their overrepresentation in the informal labour market, they are faced with increased food insecurity and livelihood challenges,” the UNDP said in a statement.

The National AIDS Programme Secretariat (NAPS) and Society Against Sexual Orientation Discrimination (SASOD) are partnering with UNDP to ensure that much needed relief is delivered to individuals and households from key population groups in Regions 3, 4, 5 and 6.

The NAPS will also pair the delivery of food items with the distribution of Antiretroviral Therapy (ART) to PLHIV to ensure that persons are still accessing and following their treatment while at the same time boosting and maintaining or supporting a strong immune system.

While receiving the food items, Director of the NAPS, Dr. Rhonda Moore, noted that UNDP’s support is part of a wider initiative to address food insecurity for members of the PLHIV key populations. In expressing appreciation, she noted that NAPS is partnering with several Civil Society Organizations to reach persons across Guyana and UNDP’s support will specifically target families as against individuals, especially where key population members are expected to contribute to their households.

Managing Director of SASOD, Mr. Joel Simpson, noted that UNDP was one of the first international partners to respond to the needs of the LGBT+ community by supporting a socio-economic needs assessment of the LGBT+ population. The findings from that study were shared with key partners and would help to support fund raising efforts to respond to the impact of COVID-19.

Resident Representative, Mr. Jairo Valverde, noted that UNDP is very happy to support vulnerable groups, who are affected disproportionately, as this is key to the United Nations mandate of leaving no one behind and reaching the furthest behind first.