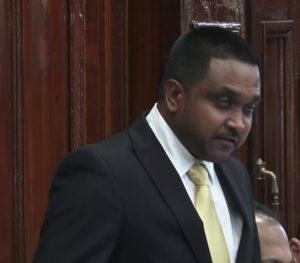 Minister of Local Government and Regional Development Mr. Nigel Dharamlall said since assuming office earlier this month, he has found that there were 56 contract workers hired by the previous government as advisors and paid hefty sums totalling over $800 million in the past five years.

In his first official engagement with the local media at the Arthur Chung Conference Centre on Monday, Mr. Dharamlall revealed that the employees are practically all in breach of their contracts, because none of them has returned to work since the new government took office.

He noted that the combined cost for their salaries is $13.5 million per month, which when calculated on an annual basis amounts to $162 million.

“Naturally, with a change in government, I think the onus is for us to have advice differently. These advisors advised former Minister Ronald Bulkan and I would like to have a different type of advice,” he explained, labelling them political appointees.

The Minister said the employees were all contacted and their employment is being dealt with on a case by case basis, and further advice has been sought from the Ministry’s personnel department in handling these matters. He deflected questions on whether they will be fired, but said, “naturally their contracts will most likely not be renewed.”

It was also discovered that of the 36 employees attached to the Secretariat of the Community Development Council (CDC), salaries per month totalled $5 million. This excluded allowances.

“And imagine when you add (Ronald) Bulkan’s secretariat and the CDC in five years you do the math…hundreds of millions of dollars the last government paid out and there is no evidence of work provided by 53 persons by the ministry,” he added.

The Minister said each and every employee from henceforth will be held accountable for all expenses under his ministry.

Mr. Dharamlall reassured that regardless of a person’s political persuasion, “as long as you are competent and professional and would like to work in the development of our country,” those persons would be welcomed on board to work with the new government.

Only last week,Minister of  Parliamentary Affairs and Governance, Gail Teixeira said political appointees of the former A Partnership for National Unity+Alliance For Change (APNU+AFC) would be fired if they do not resign within one week.

“We are asking them to resign and if they do not, they will be getting letters of termination. We are not going to be bullied. At the same time, we have given them a week to do what is right and from Monday they will receive letters,” she  said on Facebook Live video

Ms. Teixeira assured that the Dr. Irfaan Ali-led People’s Progressive Party Civic (PPPC)-administration was not about to proverbially “take bread out of people’s mouth.”

But People’s National Congress (PNC) Leader, David Granger warned of  “consequences” if the PPP-led administration continued to witch-hunt public servants and contracted workers who had been hired by his administration or are perceived to be supporters of other political parties.

Several government workers were let go when the APNU+AFC assumed office back in 2015.