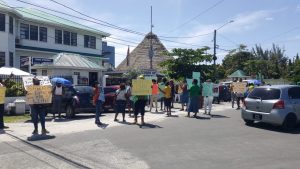 APNU+AFC supporters outside the Guyana Court of Appeal protesting the inclusion of Justice Priya Sewnarine-Beharry on the panel of judges to hear an appeal.

About 100 supporters of A Partnership for National Unity+Alliance For Change (APNU+AFC) on Friday targeted several foreign and local institutions in the first wave of targeted protests over the election results.

They chanted outside the American Embassy, Guyana Court of Appeal, the business place owned by the Chairman of the Private Sector Commission (PSC) and the Guyana Elections Commission (GECOM).

The protesters were vocal but there were no reports of damage to property or anyone injured. “It is time the overseas observers take their knees off of our necks. It is time that Guyana has to do what it has to do as a nation and let us run our own affairs because at the end of the day, the comfort zone is for Guyanese, and we need at the Appeal Court that we could have a fair trial,” a protester told News-Talk Radio Guyana 103.1 FM/ Demerara Waves Online News from the picket line. 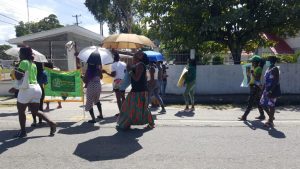 APNU+AFC protesters outside the Guyana Elections Commission, calling on Chairman Justice Claudette Singh to use valid votes to declare the results of the March 2, 2020 elections.

Pro-coalition candidate, Professor David Hinds has also issued a similar call for foreigners including those from the Caribbean Community (CARICOM) to “get out of our business.”

She questioned the impartiality of Justice Priya Sewnarine-Beharry, suggesting that someone close to her was being seen with politically-aligned people.  The woman also echoed calls by pro-coalition Elections Commissioner, Vincent Alexander for GECOM not to declare a result and call a fresh election with a new list.

At the GECOM Headquarters on Cowan and  High Streets, Kingston, they chanted “valid votes only,” “valid votes only” in line with APNU+AFC’s official stance that votes tainted by alleged irregularities such as voter impersonation of deceased and migrants and missing documents must not be counted. 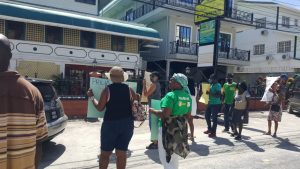 APNU+AFC supporters outside Roraima Duke Lodge which is owned by the Chairman of the Private Sector Commission, Gerry Gouveia.

Ahead of a Guyana Court of Appeal hearing on whether numbers from the national vote recount or the 10 declarations should be used to declare the final results of the March 2 polls, APNU+AFC has insisted that it would not accept a government being foisted on Guyanese with invalid votes. GECOM Chairman, Retired Justice Claudette Singh has already asked that the recounted votes be used, a position that has been endorsed by the  High Court in a recent ruling.

The High Court, in  line with rulings by the Guyana Court of Appeal and the Caribbean Court of Justice, has said that after a declaration aggrieved parties could challenge the results through a High Court elections petition.

The Organisation of American States, European Union and the Caribbean Community have been calling for the national vote recount results to be used to declare the election results.

(Sean Embrack contributed to this report)