Court of Appeal to hear recounted votes case on Saturday 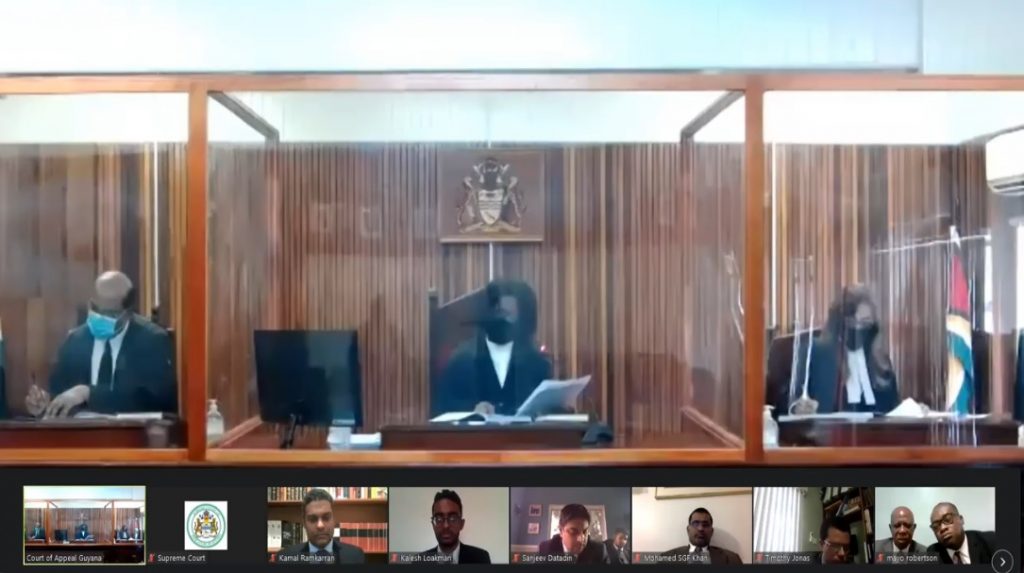 The Court of Appeal on Wednesday fixed an early date for the hearing of an appeal of a High Court decision that upheld that the votes from the national recount must be used to declare the results of the March, 2020 general and regional elections.

The court will Saturday morning starting at 10:00 hrs hear oral submissions from lawyers representing both the applicants and respondents. Presiding over the case are: Justices of Appeal Dawn Gregor and Rishi Persaud, along with Justice Priya Sewnarine-Beharry.

During the case management hearing, Justice Gregory said that submissions by the appellants would have to be filled by Thursday, while the respondents were expected to file their submissions by Friday morning. Cross appeals are also being filed by the Attorney General Basil Williams and the People’s Progressive Party’s Attorney Douglas Mendes.

Attorney-at-Law, Neil Boston representing Chief Elections Officer, Keith Lowenfield,  told that court that he would not participate in the appeal.  The appeal case was filed by attorney Mayo Robertson on behalf of APNU+AFC agent Ms. Misenga Jones who is challenging Chief Justice Roxanne George-Wiltshire’s ruling on several grounds.

In her application, Ms. Jones argued that the chief justice erred in law when she held that the issues raised in the case and the constitutionality of Section 22 of the Elections Amendment Act were both res judicata.

But in handing down her judgement on Monday, the Chief Justice said that the Guyana Court of Appeal has already pronounced on the issue, and that she was bound to follow that decision, pointing out that the applicant did not provide the High Court with any basis for that point to be reexamined.

The appeal is also challenging the Chief Justice’s ruling in relation to jurisdiction, and paragraphs 106 and 107 of the judgement of the majority of the Court of Appeal in the Ulita Moore versus Guyana Elections Commission (GECOM), saying that she misconstructed that ruling.

However, the Chief Justice on Monday said too that she based her judgement on decisions by the Guyana Court of Appeal and the Caribbean Court of Justice.

Ms. Jones claims that the Chief Justice also failed to find that GECOM and its Chair Claudette Singh had acted outside their constitutional and or statutory powers, and that they failed to properly construe the terms and provisions of Order 60 of 2020 and that that very order was invalid.

Further, the court also failed to consider that GECOM had exceeded its constitutional and statutory power when it issued and established and executed Order 60 of 2020.

However, the Chief Justice said arguments by Ms. Jones lawyer and Attorney General, Basil Williams that Order 60 is unconstitutional were “hopelessly invalid.”

She had also chided those who were seeking re-litigate public interest cases when the questions have been settled already by the courts and noted that Order 60 that facilitated the GECOM’s recount of votes cast in the general and regional elections four months ago is valid.

The Chief Justice made it clear that only the recount data can be used to declare the results of the polls and that the Chief Elections Officer, Keith Lowenfield is subject to the direction and control of the Chairman and the GECOM as he is a mere functionary.

At the conclusion of the oral arguments on Saturday, a date will be set for the decision by the court.