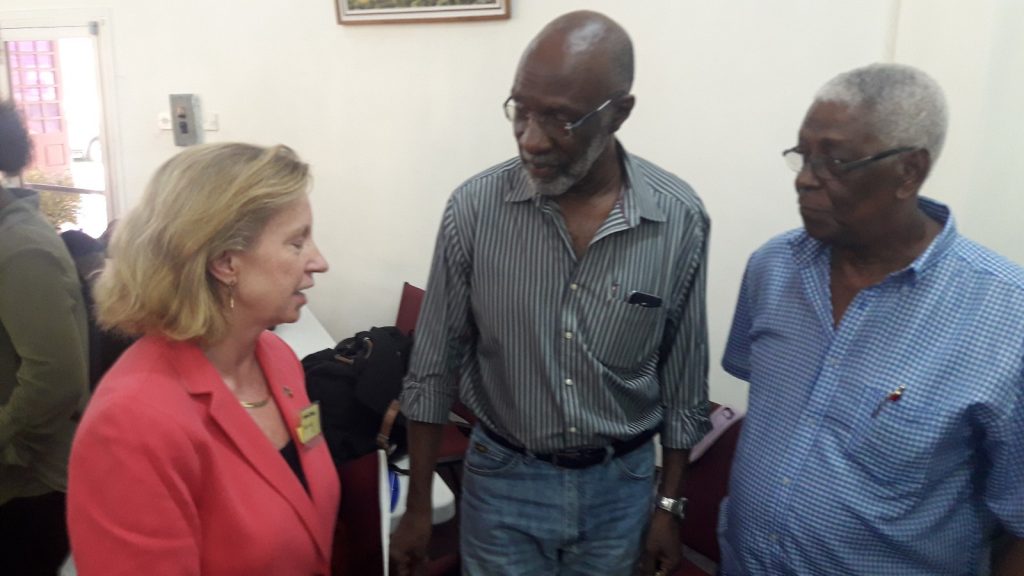 The United States (US) on Thursday expressed shock at attacks on the Chairman of the Guyana Elections Commission (GECOM), Retired Justice Claudette Singh.

American Ambassador to Guyana, Sarah-Ann Lynch, reiterating that the national vote recount should be used by GECOM to declare the results of the March 2, 2020 general and regional elections, called on Guyanese to cease condemning Singh.

“I’m shocked and appalled at the dangerous statements and actions  I have seen directed at the Chairman. Chairman Singh is a person of the utmost integrity and a distinguished jurist who has given decades of her life in service to her country. I hope that all Guyanese will speak out on her behalf and allow her to do her work and bring this electoral process to closure,” Ms. Lynch said.

Earlier this week, a group of pro-APNU+AFC supporters fetched an effigy of  Justice Singh in a coffin as they made threatening remarks after she ordered the Chief Elections Officer, Keith Lowenfield to report the results if the March 2, 2o20 polls using the data from the national vote recount.  Guyana’s High Court is expected to hand down its decision on the latest in a string of cases to challenge the elections.

Asked, during the press briefing, what would be the US’ position if the Court rules that the recount votes should not be used to declare the results of the now more than four month-old elections, she said declined to comment. At the same time, she said “we will wait for a declaration from the Chairman of GECOM.”

Ms. Lynch remarked that the visa sanctions against those undermining Guyana’s democracy that were announced by US Secretary of State, Mike Pompeo “took place immediately” but she declined to say how many people would be affected. The US Consular Section plans to contact them.

Reacting to claims by Prime Minister Moses Nagamootoo that the US and other like-minded countries were conspiring to force the Granger-led coalition out of office as part of a plot to remove Venezuela’s Nicolas Maduro administration, the US Ambassador said “we are focussed on Guyana. It has nothing to do with any other nation.” She assured that the US was not interested in whether the People’s Progressive Party (PPP), A Partnership for National Unity+Alliance For Change (APNU+AFC) or any other party gains power. “The US has long said that is has no preference for a winning party as as long as that party is selected through a free and fair electoral process,” she said.

The US continues to impose a raft of personal and other sanctions on top Venezuelan government officials and the country in a bid to squeeze the government out of office.

Meanwhile, Chairman of the Caribbean Community (CARICOM), St. Vincent and the Grenadines’ Prime Minister Ralph Gonsalves has labeled as “anti-democratic brigands” those who have been assailing the CARICOM Secretary General and staff of the Guyana-based headquarters of the regional trade, economic and foreign policy bloc. “I am deeply disturbed at the credible reports that persons allied to certain political forces in Guyana have been threatening, defaming and verbally abusing leading personalities in the CARICOM Secretariat including the Secretary General, Irwin La Rocque,” he said.

Dr. Gonsalves called on President David Granger, “an honourable man”,  to denounce the perpetrators. “These self-same violent, vulgar persons have failed in their attempts to coerce and bully” him, Barbados’ Prime Minister Mia Mottley and former Barbados Prime Minister, Owen Arthur for speaking out against the political situation in Guyana.

Dr. Gonsalves had called on Mr. Granger to “take yuh licks like a man” and Ms. Mottley had criticised the Chief Elections Officer, Keith Lowenfield for subtracting 115,000 votes unilaterally in a report to the GECOM Chairman.  Mr. Lowenfield had said he had been guided by a Guyana Court of Appeal ruling. The legal arguments mirror the positions taken by the three pro-coalition election commissioners, Vincent Alexander, Desmond Trotman and Charles Corbin.

The submission of the report based on the 10 declarations dating back to March includes the one from Region Four that show bloated figures in favour of A Partnership for National Unity+Alliance For Change (APNU+AFC) with 136,057 votes and 77,231 for the PPP.

The recounted votes show that APNU+AFC got 116,941 and the PPP 80,920. That was the only region whose votes were called into major question by the PPP and all international and regional observers.

The results that Mr Lowenfield submitted on Saturday increases the number of valid votes cast to 475,118 instead of the 460,352 votes that were recounted and certified as valid. In his latest report, David Granger’s APNU+AFC got 33 seats, the PPP 31 and the three joinder parties 1 seat.