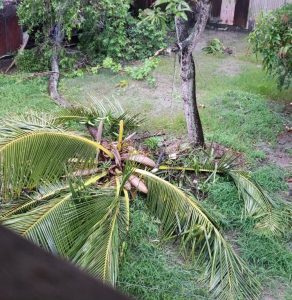 AN uprooted coconut tree that heavy breeze tossed from one yard to another in suburban Georgetown.

Several communities were Wednesday affected by power outages, flooding and some homes  were left with damaged roofs due to the severe weather experienced on Wednesday morning.

A number of trees were broken and others uprooted. There were no immediate reports of injury.

According to him, the CDC is still gathering information, but so far there were no other serious  damage caused except for four homes losing their rooftops to heavy winds.

“Four homes were impacted by roof lifts. Two on the lower East Coast (Demerara), one in Essequibo and another in Georgetown. There were also some flooding recorded in a few villages,” he said.

The CDC official also noted that damage assessment teams were deployed to further assess the situation.

Meanwhile, the Guyana Power and Light Inc (GPL) said that it also recorded damages to some of its infrastructure which led to power outages in many communities in Georgetown, East Coast Demerara and Berbice.

The power company said in a statement today that the bad weather damaged many of its power lines,  destroyed poles and other major infrastructure that houses its stations were also damaged.

“Teams have been dispatched to conduct remedial work. Every effort is being made to  restore power to affected customers in the shortest possible time,” GPL said earlier Wednesday.

2020-07-08
Denis Chabrol
Previous: US calls on GECOM to declare results based on recounted votes
Next: Gold Board predicts reduced gold declaration due to COVID-19 shutdown in Aranka, Moruca