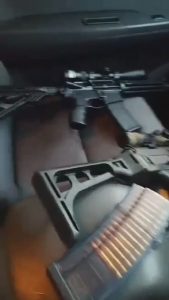 Police on Thursday confirmed that the cache of weapons seen in a video with a man making threatening remarks are the same that they seized from a private security firm.

Commander of ‘A’ Division, Senior Superintendent Phillip Azore says the 26-year old man, who is still in custody, is being questioned about the motive for his actions.

He was arrested yesterday and the guns seized from a private security firm as police continue their investigations.

Commander Azore of A division confirms that the male suspect was arrested with the same firearms he had on display on social media.

The male man, who worked at a private security firm,  circulated on social media several firearms and uttered threats purportedly to a political party.