Granger plays up importance of CARICOM report on recount 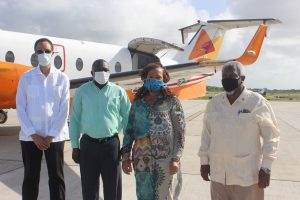 President David Granger seemed set to  place great weight on a report by a team of Caribbean Community (CARICOM) scrutineers in determining the outcome of general and regional elections held almost three months ago.

The three scrutineers are actively involved in the recount process of the votes cast in the presidential, parliamentary and regional council elections.

Speaking on the state-owned National Communications Network’s programme, CONTEXT, Mr. Granger said the position by the CARICOM team would be important based on decisions by the court, Chairman of the Guyana Elections Commission, Justice Claudette Singh and the six other commission members.

“In the final analysis, CARICOM, CARICOM with a team of observers will make a statement on its surveillance of the recount process,” he said Monday night.

The President has pledged to accept “any” results that would be declared by GECOM after the recount exercise now its 21st day at the Arthur Chung Conference Centre, Liliendaal, Greater Georgetown.

At the peak of concerns about the legality of the tabulation and declaration of results by Returning Officer Clairmont Mingo, Granger recalled that he had participated in facilitating a visit by five CARICOM leaders which led to the national recount of the votes cast. “It is their hands that the recount process or it is under their surveillance process will continue,” he said.

The Guyana government, in refusing the United States’ government’s request for the return of Carter Centre observers to witness the recount, has said that CARICOM remains the most legitimate interlocutors in the Guyana situation.

Government has said  Guyana is equally confident in the legitimacy, credibility and competence of the CARICOM team to perform its task.

It is not yet clear what would be government’s next move – whether it will accept the declaration from the recount or ask its three election commissioners to reject the use of that data and revert to the 10 declarations by the 10 Returning Officers that have been held in abeyance.

APNU+AFC General Secretary, Joseph Harmon on Monday again alleged that the recount has called into  question more than 80,000 votes but at the same time he maintained that based on the 10 declarations in abeyance his coalition won the March 2 polls.

The GECOM Chairman has asked A Partnership for National Unity+Alliance For Change (APNU+AFC) to submit evidence to support claims of irregularities such as voting in the names of dead people and people who were overseas on voting day.

The People’s Progressive Party and A New and United Guyana have argued separately that the votes that are being recounted are the same as those that had been cast in the elections. Those parties have contended that GECOM is obliged to declare results from the recount and if a party wants to challenge the results, it can file an elections petition in keeping with Guyana’s constitution.

2020-05-26
Denis Chabrol
Previous: Nandlall, Harmon haggle over claims of fake ballots
Next: Next Guyana gov’t “will have to rule for the benefit of every Guyanese” -Britain