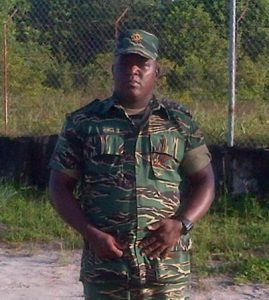 The surviving soldier in Thursday’s explosion at the Timehri-based Arms Depot of the Guyana Defence Force (GDF) has been identified as 43-year old Quincy Threlfell of Hopetown, West Coast Berbice, sources said.

He was air-dashed by helicopter to the Georgetown Public Hospital where he has been receiving emergency treatment.

The GDF said the incident occurred at about 9 AM while the soldiers were preparing pyrotechnics, also called fireworks, for demolition.

Eight others were injured in a similar explosion on February 22, 2020 when they had been loading pyrotechnics from a truck to a pontoon at the Coast Guard Headquarters, Ruimveldt, Georgetown.