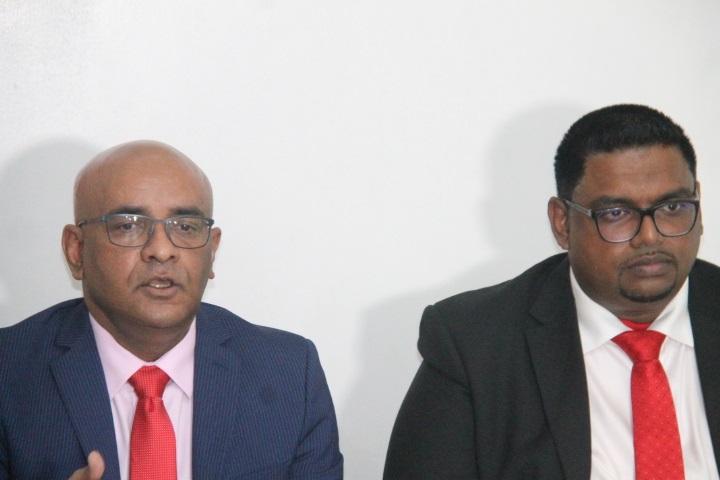 The People’s Progressive Party (PPP) will declare Irfaan Ali as President of Guyana, if the recount of votes cast in last month’s polls are is derailed, Opposition Leader Bharrat Jagdeo said Thursday.

Sceptical that the incumbent A Partnership for National Unity+Alliance For Change (APNU+AFC) would manipulate the recount, scuttle or discredit the recount and use the Region Four declaration by Returning Officer Clairmont Mingo to make an official declaration, Jagdeo said Ali would be declared the next leader of Guyana.

“Should they tamper with this process or alternatively try to sabotage it to return to the old Mingo declaration, then this is a possibility, this is a very real possibility,” said Jagdeo in response to a question on a virtual press conference on whether Ali would be declared President in a similar way as Juan Guaido in neighbouring Venezuela has been.

The PPP has claimed victory and has challenged  APNU+AFC to also release its Statements of Poll to prove whether it has won or lost the March 2, 2020 general and regional council elections.

The PPP General Secretary said his party was so far “sticking” by its promise to the international community  to see if the official declaration would be legitimate. “That is why we are giving this process an opportunity to work,” he said.

The PPP election commissioners- Sase Gunraj , Bibi Shadick and Robeson Benn- were last week defeated by Chairman of the Guyana Elections Commission (GECOM), Retired Justice Claudette Singh in their quest to have the commission recall and nullify the Region Four declaration. Singh reportedly said that the Region Four declaration would be held in abeyance until they are replaced by the results from the recount. Pro-coalition commissioner, Vincent Alexander has said all 10 Regional Declarations are legal and their fate would be determined after the recount.

But utterances and decisions like these are already not sitting well with the PPP General Secretary. He said APNU+AFC clearly intends to run the recount amok, but if they create problems the international community would punish those platers. “There will be sanctions. That doesn’t help them to get out of this without any consequence,” he said. Jagdeo added that the PPP would call for personal sanctions and an end to loans and grants and that no disbursement of oil revenues.

The United States (US), Britain, Canada, European Union, Commonwealth and the Organisation of American States  have cautioned that any declaration and swearing in of a President on the basis of the existing 10 declarations would  not be recognised.