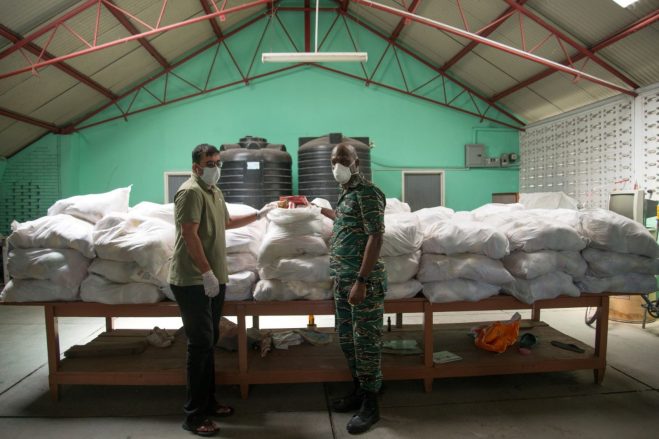 Ganesh Singh, programme coordinator of the Guyana Council of Organisations for Persons with Disabilities (GCOPD).

Eighteen organizations, which cater to the vulnerable persons in society, especially those living with disabilities, are expected to become beneficiaries of food and sanitation hampers from the Civil Defence Commission (CDC) in the coming days, as it continues its social relief efforts, government said Thursday night.

Four such organisations: the Guyana Deaf Association, the Gifted Hands Learning Centre for Special Needs, the Guyana Society for the Blind and the Vocational Training Centre for Persons with Disabilities, today, received their hampers.

Director General of the CDC, Lieutenant Colonel Kester Craig, in an invited comment, said the Government engaged the Guyana Council of Organisations for Persons Living with Disabilities and subsequently, arrived at the list of 18 organisations.

According to the Director General, the list represents registered organisations from Regions Two, Three, Four, Five, Six, Seven and Ten. He noted that in most cases, the CDC will be distributing food hampers to the parent organisation, which will then ensure that is it is distributed to its members. In some cases, where the CDC’s assistance is needed to visit some of the homes, assistance will be provided.

“We have worked with the Council over the past two weeks to identify and prioritise persons living with disabilities and today we started the series of distribution. We hope that it can lessen some of the impact they are feeling during this time, especially as vulnerable members of society. So, we are happy to have partnered with the Council and the organisations to ensure that relief is provided,” he said.

Mr. Ganesh Singh, Coordinator of the Guyana Council of Organisations for Persons Living with Disabilities, who was on hand to witness the distribution of supplies, said he is happy that the CDC has responded in such a timely manner after it was initially engaged.

Mr. Singh said 752 persons are expected to benefit from this tranche of relief supplies.

“This will be a great assistance because persons with disabilities, like any other Guyanese, have been severely affected.   Most of them are unemployed and living in poverty. They are even more affected because of this COVID-19 crisis and so this is a great, great help. These hampers will be delivered to persons who are registered with the various organisations,” he said.

Mr. Cecil Morris, Chairman of the Council, also welcomed the initiative, noting that it will greatly assist the members of the various organisations, who are already challenged physically and financially.

“A lot of persons would have been wondering where the next meal is coming from because of this situation that we are in today, but with this help, at least for a couple of weeks, everything should be fairly okay so we want to say how much we are appreciative of this,” he said.

“I know it will benefit my students a whole lot because a lot of their parents do not have a steady income or most of them are self-employed. They are grateful and I must say thank you because it will go a long way for them,” she said.