Harmon no longer Director-General of the Ministry of the Presidency 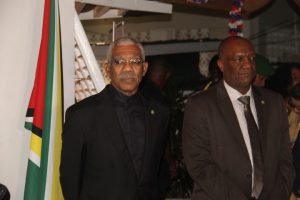 Joseph Harmon is no longer Director-General of the Ministry of the Presidency and a successor has not been named, the president’s spokeswoman, Ariana Gordon confirmed Saturday evening.

In making the announcement, the Ministry of the Presidency called it a clarification but gave no reasons for the move.

Harmon was appointed Director-General of the Ministry of the Presidency from May 1, 2019, weeks after he had been requested to demit office as Minister of State because he was an American citizen.

His removal from the post of Director-General and shifting to the COVID-19 Task Force comes less than one week after President Granger came out and denied any role or knowledge whatsoever in hiring a United States lobbying firm. The President had also denied that State funds had been used to hire the firm which stated in a dossier that he  was a United States citizen.

Granger has also vehemently denied ever being a citizen of any other country.

Harmon, who is named in the lobbying firm’s filing with the United States State Department, as the point-person for the Guyana government and the address being the Ministry of the Presidency, had said that the firm had been recruited to reach out to the US and other major capitals to counter the People’s Progressive Party’s version of political issues. The PPP has hired another American lobbying company, Mercury Public Affairs.

A Partnership for National Unity+Alliance For Change (APNU+AFC) coalition’s dossier submitted by the firm in the Guyana government’s name also seeks to cast China and Russia as part of a scheme with Venezuela to control the wealth offshore South America.

Harmon was named CEO of the National COVID-19 Task Force against the backdrop of the Task Force Chairman, Moses Nagamootoo coming in for sharp criticism over the management of the entity’s aid delivery. The Ministry of the Presidency also distanced itself from Nagamootoo’s link between no foreign aid and the unresolved 2020 general and regional elections..

A recount of the more than 400,000 votes cast on March 2, 2020 is expected to be conducted under the watchful eyes of a Caribbean Community (CARICOM) team of scrutineers.